1. Define what button football is. Tell a brief history of how the sport came about.

Button football (or soccer) is a football simulation game played on a table-top using concave "disks" or "buttons" as players. Board dimensions, markings, and rules of play are modeled to simulate standard football. It is popular throughout all of Brazil and Hungary, as well as other countries in Europe.

The origins of button football are likely derived from any number of games played with tabs, bottle caps, or coins.

In Brazil, the patron of button football is widely accepted as Geraldo Décourt. He began playing in 1922 as a schoolboy, using buttons removed from his clothing as pieces. Likewise in Hungary, button football can be traced back to the early 1900s, with schoolboys taking the buttons off their coats to play.

Button football continued to grow in popularity, especially during the early 50's. At that time, various materials were used for linesmen, some industrial, some hand-made. Industrial buttons could be ten-pieces sets, uniform in size and color, or sold as individual pieces, varying in size according to function (larger ones for defenders, mid-sized ones for midfielders, smaller ones for attackers).

2. Know at least two methods that can be practiced with button football.

3. Know and explain some basic rules before starting a button football game.

There are a variety of different rule systems to define play. The following general guidelines are common to most, if not all:

At the opening kickoff, all 11 pieces are relegated to their respective sides. Field players are moved during the game by using a circular disk to exert a downward force on the field pieces, propelling them forward (pieces may never be pushed with the disk). Field pieces are propelled forward to strike the game ball. The ball is either sent forward and then hit again with the same field piece the next play (i.e. "dribbling"), sent forward towards another field piece on the same team (i.e. "passing"), or towards the opposing goal (i.e. "shooting"). Players alternate manipulating their pieces based on the possession rules defined in each rule system.

Shots on goal must be declared by the attacking team prior to being taken to allow the defending team to adjust its goalkeeper. If the ball enters the goal without a shot having been declared, the goal is annulled.

Button may be manually manipulated at intervals determined by the governing rule system, usually only during stoppages in play.

For corner kicks, free kicks, and penalty shots, the ball is placed in the appropriate location and a button is placed behind it at the attacking player's discretion. Throw-ins and goal kicks are simulated by placing the ball at the appropriate location, then either flicking the ball with disk or goalkeeper, or again by lining up a button behind the ball (depending on the rules of the particular rule system).

Fouls may also be declared for gameplay offenses such as affecting pieces or the ball at inappropriate times, touching the opposing player's pieces, or unsportsmanlike conduct.

Specific rules are defined for each rule system, with the primary difference being the number of touches each team may have per possession.

4. Make a list of the necessary equipment to play of a game of button football.

The game is played on a smooth, flat surface with markings per a regulation football field. 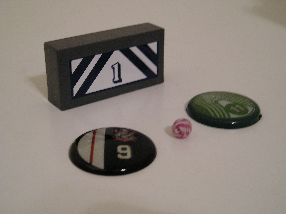 Each team consists of 11 pieces, 10 field pieces, or buttons, in the form of small circular disks, and 1 goaltender piece in the form of a rectangular block. At the opening kickoff, all 11 pieces are relegated to their respective sides. Button are always circular in shape. Lower quality pieces are made of plastic and of a wide variety of diameters. Higher quality pieces are made of fiberglass, having a diameter of typically between 35 mm and 50 mm, and a height usually no greater than 8 mm. Nowadays, in formal games and tournaments, all buttons should be of the same material, color and size.

The game ball is a sphere of woven felt with a diameter of 10 mm weighing between 0.1 and 0.3 grams.

Buttons are propelled using a flat circular plastic disc of approximately the same diameter as the buttons. Physical characteristics are not critical.

5. Name some of the raw materials that can be used in the manufacture of a button.

This is a game with a duration of two 25-minutes halves. There are a number of 3 touches per team per possession, shots on goal only following a pass. Scoring is typical of conventional football. Strategy primarily revolves around limiting the opposing team shots on goal.

Whenever a foul occurs, the player who has suffered can choose to throw out the foul or ask for "the law of advantage" and continue the game.

7. What is the average time of the duration of a game of buttons football?

8. What is the official measure of the table for button football? Make a demonstration diagram of the court, drawing the lines and measures that are mandatory to play this game.

9. Make a complete button football team with any material of your choice. Design an identification logo for your team.

10. Participate in at least one game or enroll in a button football competition organized by your region, making a brief report of what happened in the game(s).