1. Have the Weather Honor

This Wiki has a page with instructions and tips for earning the Weather honor.

Aboard
on board, or being present on a boat.
Aft of after
toward or near the rear of a boat.
Amidships
halfway between the front and rear of a boat.
Astern
behind the boat or backwards.
Bay
a body of water partially enclosed by land but with a wide mouth, affording access to the sea.
Beacon
a signaling or guiding device, such as a lighthouse, located on a coast.
Binnacle
protective box for a compass.
Bollards
short, heavy posts on a pier for securing boats.
Bow
the front section of a ship or boat.
Buoy
a float moored in water to mark a location, warn of danger, or indicate a navigational channel.
Channel
the deeper part of a river or harbor, especially a deep navigable passage.
Cuddy
small space under the foredeck for storage.
Fathom
a unit of length equal to 6 feet (1.83 meters), used principally in the measurement and specification of marine depths.
Draught
the depth of a loaded vessel in the water, taken from the level of the waterline to the lowest point of the hull.
Galley
marine name for kitchen.
Harbor
a sheltered part of a body of water deep enough to provide anchorage for ships.
Hatch
an opening through the deck through an area below.
Heading
the course or direction in which a ship or aircraft is moving.
Heave
marine name for throw.
Helmsman
pilot of the boat, the person who steers.
Hull
the main body of the boat. The outside surface of the boat.
Keel
the backbone of the boat that extends from bow to stern.
Knot
a unit of speed, one nautical mile per hour, approximately 1.85 kilometers (1.15 statute miles) per hour. If traveling due north or due south at one knot, you will cover one minute of latitude in an hour.
Latitude
the distance north or south of the earth's equator, measured in degrees along a meridian, as on a map or globe.
Leeward
the direction the wind is blowing.
Longitude
distance on the earth's surface, measured east or west from the prime meridian at Greenwich, England, to the meridian passing through a position, expressed in degrees (or hours), minutes, and seconds.
Port
left side of a boat when looking toward the bow.
Sounding
A measured depth of water.
Starboard
the right side of a boat when looking toward the bow.
Stern
back end of the boat.
Swab
marine name for a mop.
Underway
when a boat is moving through the water.
Waterway
A navigable body of water, such as a river, channel, or canal.
Waypoint
a point between major points on a route, as along a track.

3. Name at least three aids to navigation and their functions. By whom are these maintained?

An aid to navigation is any device external to a craft that is designed to assist in determining the location of the craft, a safe course for the craft, or to warn of dangers. Most aids to navigation are established and maintained by the government. In the U.S., this is done by the Coast Guards.

a. Lighthouse
are located along the seacoast and at important harbor entrances. They operate automatically without a full-time lighthouse keeper.
b. Beacon
miniature, unmanned, lighthouses that are placed along banks and ledges to mark isolated dangers. Horns and mechanical bells are sometimes used in beacons during times when visibility is low.
c. Buoys
floating navigational aids that are divided into 3 categories- unlighted, sound, and lighted.
d. Radio beacons
by use of radio signals, this system is designed to meet at least 3 objectives: to give a nearly continuous 2 position line capability to a distance offshore of at least 50 miles: to give working ranges up to 160 miles at certain key locations for approaching from far offshore and to provide continuous, low-powered guidance for inshore navigation.

4. Name six types of buoys. What do they mean and how are they used? Give the colors of the six you named. How are buoys numbered? How do they mark channels?

Buoys used to mark the edges of channels:

a. Mid-channel buoys
have a white light and have white and black vertical stripes. They show the direction to the harbor.
b. Fairway buoys
may be of any shape. They are painted black and white vertical stripes. These buoys mark the center of a channel or fairway and should be passed close aboard on either hand.
c. Anchorage buoys
are always white and mark where an anchorage may be made.

5. Box a compass with eight cardinal points. Why is it so important in navigation? Where is it mounted in the vessel, and why? 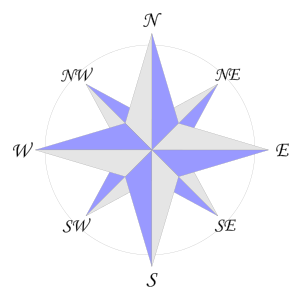 8 cardinal points of the compass

"Boxing a compass" means to name the points on the compass in a clockwise order starting with north. With eight cardinal points, this would be:

The compass is used along with a geometry compass, dividers, parallel rules, a straightedge, and a protractor to find the boat’s position on charts. When the sky is overcast and there is no land in sight, it is very easy to get disoriented. The compass will keep you on course and help you find your way back to port. Compasses are meant to be mounted on bulkheads, atop consoles, gimbals, or brackets. Some are flushed and mounted. Flush mounts are better because they transmit less vibration than a bracket-mount compass. The compass should have a guard to protect it from damage and a hood to eliminate sun glare.

6. Name four of the most useful knots in seamanship. Know how to tie them and give their principal uses.

7. Familiarize yourself with reading and interpreting a "chart." Why is a chart so invaluable in unknown waters? Give some of the things a chart shows. Give the symbols used on a chart, or two of the most used buoys.

8. When you are taking an active part in navigation, what are three of the best safety rules to follow?

9. What does it mean to be properly equipped? Illustrate.

A properly equipped boat has on it:

Appropriate sized life preservers for all aboard. Button, zip and strap up all of the closures of the lifejacket.. The jacket should be snug but not so tight that you can’t breathe. Lift your arms in the air. Make an eleven with your arms, the universal football touchdown sign, and put your hands straight up in the air. If the life jacket does not rise, it’s a good fit. Follow this rule for adults and children. (Could draw a person with their arms raised up and the lifejacket fitting snuggly to body, not moving upward.)

A properly ventilated fuel tank and engine room At least 2 ventilator ducts fitted with cowls of for the purpose of properly and efficiently ventilating the bilges of every inboard engine and fuel tank compartment of boats constructed or decked over after April 25, 1940, using gasoline or other fuel having a flashpoint less than 110 F. Boats built after 31 July 1980 must have operable power blowers.

A whistle, bell or horn. Any Device capable or making an "efficient sound signal" audible for 1/2 mile.

Visual distress signals. Required only when operating at night (N). Some night equipment choices as for larger boats including: Orange Flag with Black Square-and-disc (day); and an S-O-S electric light (night); or 3 orange smoke signals, hand held or floating (day); or 3 red flares of handheld, meteor, or parachute type (day/night).

Navigational lights to be displayed between dusk and dawn. Recreational boats operating at night are required to display navigation lights between sunset and sunrise.

10. What is meant by "rules of the road" and by "proper water etiquette?"

For the purposes of the sailing honor we will focus in the rules of the road that apply to small sailing boats.

There are five basic rules of the road for small sailing boats to decide who has the "Right-of-Way" so that each boat's skipper (driver) will know what to do to avoid a collision.

When sailing the words "left" and "right" in reference are replaced with "port" and "starboard". It is important to remember which is which since the rules of the road for sailing rely on using these words to assign right-of-way. 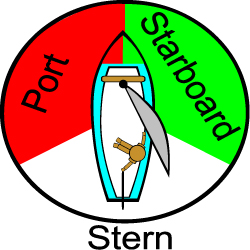 You might be able to remember this by noticing that the letter "R" appears twice in the word "starboard", and only once in "port". Then since "right" begins with "R", you will know that the right hand side of the boat when facing forward is the starboard side. 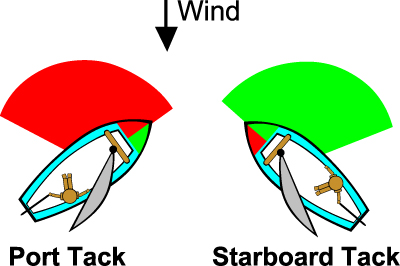 When two sailboats are approaching each other and are on different tacks, the boat on the starboard tack has the right-of-way over the boat which is in the port tack. An easy way to remember this is to think about power boat lights. At the front the boat has red on the port (left side) and green to the starboard (right). If you are approaching a boat and can "see" the red light, then the other boat has the right of way. (small sail boats rarely have the actual lights, but you can imagine them)

In the illustration below, boat "A" on the port tack, must turn to avoid boat "B" on the starboard tack. 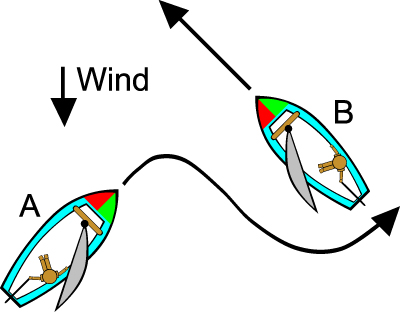 In the illustration below, boat "B" is the windward boat and must turn to avoid boat "A" which is leeward. 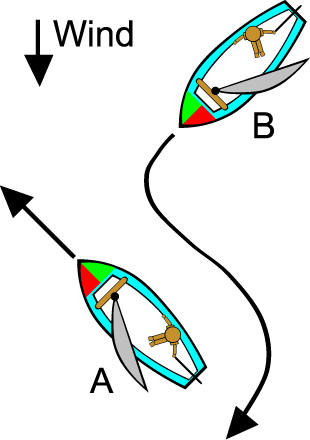 In the illustration below, boat "A" must ensure that it leaves plenty of room to avoid boat "B", who has the right-of-way, since boat "B" is continuing on its tack. However, in the event that boat "A" was unable to tack due to the proximity of "B", remember that "A" is the leeward boat so therefore could tell boat "B" to give room to tack, but would lose this right of way as soon as they actually began to tack. 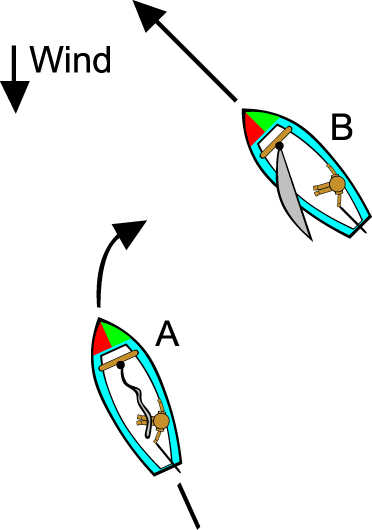 Any sailboat that is overtaking a slower boat from behind must steer clear of the slower boat and give right-of-way. The slower boat should hold its course and allow the faster boat to pass.

In the illustration below, boat "A" is a faster boat, and must steer around the slower boat "B", who should remain on the same course.

Most of the time sailboats have the right-of-way over power boats. Since most powerboats are more easily maneuverable than sailboats, they must steer clear. This is not always the case however. Larger power boats are sometimes steering in the deep channel of the area, and cannot leave the channel. In this case the sailboat does not have right-of-way, and must avoid impeding the progress of the larger vessel. Many larger power boats cannot simply stop quickly or easily turn to avoid a small sailboat, so it is in the sailor's best interest to steer well clear of these larger boats.

In the illustration below, the powerboat "A" must turn to avoid the sailboat "B", who has the right-of-way. 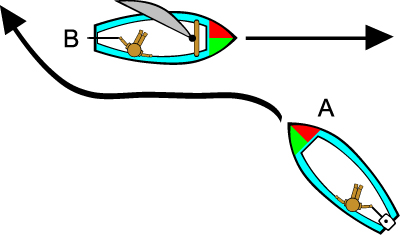