Softball is a variant of baseball played with a larger ball on a smaller field. It was invented in 1887 in Chicago as an indoor game. It was at various times called indoor baseball, mush ball, playground, softbund ball, kitten ball, and, because it was also played by women, ladies' baseball. The name softball was given to the game in 1926. There are two types of softball. In the most common type, slow-pitch softball, the ball, sometimes larger than the standard 12 inches, must arch on its path to the batter; there are 10 players in a team; and bunting and stealing are prohibited. In fast-pitch softball, the pitch is fast, there are 9 players on the field at one time, and bunting and stealing are permitted. Softball rules vary somewhat from those of baseball. Two major differences are that the ball must be pitched underhand—from 46 ft. for men or 43 ft. for women as compared with 60.5 ft. in baseball—and that seven innings instead of nine constitute a regulation game. Despite the name, the ball used in softball is not very soft. It is about 11 or 12 in. in circumference for slow-pitch, which is 3 in. larger than a baseball. The infield in softball is smaller than on a baseball diamond; each base is 60 ft. from the next, as opposed to baseball's 90 ft.

2. What is the meaning of Good Sportsmanship?

3. Name and demonstrate your understanding of the skills required for the ten (10) softball playing positions. 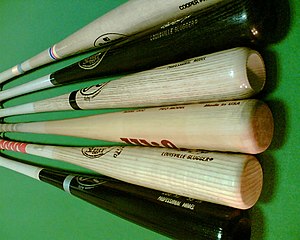 A collection of bats

The bat used by the batter can be made of metal, wood, or composite materials (carbon fiber, etc.). Sizes may vary but they may be no more than 86 cm in length, 6 cm in diameter, or 38 oz. in weight. The Slowpitch softball bat barrel standard is 2 1/4 inches. Many players prefer a smaller barrel that lightens weight and provides more swing speed 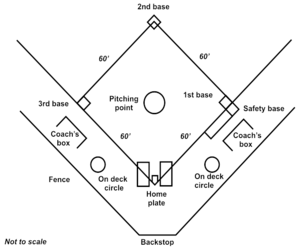 b. On deck circle

The "on deck circle" is a circle outside the field of play where the next batter stands while waiting for a turn to bat. The next player to bat is said to be "on deck."

The outfield is the area of the softball diamond beyond the baselines (which are the lanes between the bases).

The coaches' box is a rectangular area outside the field of play. A softball diamond has two of them, with one situated near first base, and another near third base. The base coaches stand in these to offer instruction and advice to the runners.

The pitcher's mound is a raised area in the center of the infield. The pitcher stands on the mound when pitching.

Diamond bag is another word for base. There are three of them, designated first, second, and third base. 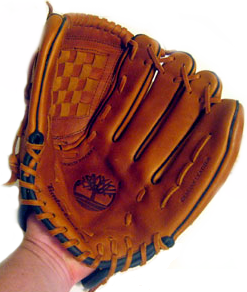 All defensive players wear fielding gloves, made of leather or similar material. Gloves have webbing between the thumb and forefinger, known as the "pocket". The first baseman and the catcher may wear mitts; mitts are distinguished from gloves in that they have extra padding, and no fingers. Gloves used in softball are generally larger than the ones used in baseball.

A bunt is not legal in most slow-pitch softball leagues. If allowed, it is performed by the batter moving his/her upper hand up the stock of the bat, bringing the bat parallel to the ground as it makes contact with the ball. The goal is for the ball to drop mere inches in front of the plate, thus forcing the fielders to make the "sure out" at first and advance the other base runners. It is a tactical move that is better suited to the expertise of players in fast-pitch leagues. Also, since most slow-pitch softball games require a 6' arc pitch, a bunt is nearly impossible.

An inning is composed of a top and a bottom of the inning. During the top of the inning the visiting team bats until they make three outs. In the bottom of the inning the home team bats until them make three outs. Most slow-pitch softball games have seven-innings. However, there are other rules (that are common to most leagues--check your local league's rules) that may limit the number of innings played such as: 1. No inning may begin after the one-hour of play has ended 2. If one team is leading by 15+ runs after 3 innings or 10+ runs after 5 innings, the game is called (ended). This is often called the "mercy rule."

This is a list of the players on a team and the ORDER in which they bat. In many slow-pitch softball leagues, all players on a team hit, regardless of whether they are part of the 10-man-field. In many leagues, a team is allowed to play the game with only 8 of their 10-person field players present. However, when there are less than 10 batters, an out is taken whenever those spots come up in the rotation. In most cases, if a player arrives late they can ONLY be inserted in the lineup at the bottom of the lineup. Thus, if your "#3 hitter" shows up after the game has started, he/she can't hit where you strategically like him/her to. Instead he/she bats at the bottom of the lineup.

This occurs when the batter swings at a pitch and makes contact with the ball. However, the ball does not "land" between the lines (the field area), but instead flies far left, far right, or behind the batter, and thus not in the field of play. After the player has received a second strike, he/she is allowed a "courtesy foul" but if he/she fouls a second time (after the second strike), he/she is called out. If a foul tip is caught by a fielder (usually the catcher or infielder), he/she is called out.

A home run (HR) with runners on all three bases prior to the home run. Thus, the home run results in four RBIs for the hitter and 4 runs scored for the team.

The area between the shoulders and knees of the batter that is the width of the home plate (thus a rectangular area). A pitch delivered through this zone is considered a strike.

In most leagues, a player enters the batters box with one strike and one ball (to speed up the game), and thus, two more strikes either swung at or called strikes result in an out.

7. Demonstrate the ability to read a basic scorecard that was scored in a game you participated in.

9. Name 5 mental and physical attributes to be gained from slow-pitch softball.

10. As a team or individual, develop a plan to practice outreach while completing the requirements for this honor. Possible options could include the following:

a. Invite 3 friends not from your church to play a game.

b. Have prayer before each game.

Batter up! Have fun.

12. Write a one page report on a famous athlete. Discuss why they are or are not a good Christian role model.

We would encourage you to limiting your report to one page about a famous baseball/softball athlete. Olympic baseball, Olympic women's softball, Major League Baseball, the Negro Leagues (historical), Wikipedia List of Professional Baseball Leagues, and Baseball Hall of Fame] may give you some ideas.

Remember that not all super stars are admirable Christian role models. Many have abused alcohol, performance enhancing drugs, etc. In addition, many have used sports as an excuse to live lives not in keeping with the 10 Commandments, especially commandments #7 and #10 ("Thou shalt not commit adultery" and "Thou shalt not covet.") However, as in most walks of life, there are heroes that not only stand out professionally as the best in their field, but who also live model lives that Christian young people can admire.

REMEMBER, this is ONLY a ONE PAGE report.

Please practice honesty by NOT simply cut-and-pasting a Wikipedia biography into a word document. Your paper should show thought and highlight the question asked in this requirement.

13. Discuss with your Pathfinder leader, pastor or teacher the problems facing a Seventh-day Adventist youth considering participating in sports in Jr. High, High School or college. What alternatives are there to allow for continued activity in sports?

Mark O'Ffill is the author of the answers for the "Slow Pitch Softball Requirements" and also was responsible for taking several editions of differing proposed honor requirements and submitting one united honor proposal to the Honors Taskforce. At the time this article was written, Mark was a teacher at Hilltop Christian School in Antioch, CA, where he taught PE to grades 3-10, in addition to History and Bible classes for grades 7-10.