From Pathfinder Wiki
Jump to:navigation, search
This page contains changes which are not marked for translation. 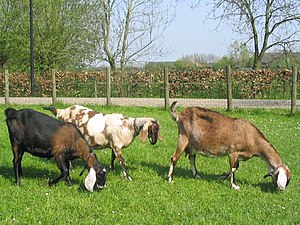 The Anglo-Nubian, or simply Nubian in the United States, is a breed of domestic goat developed in Great Britain of native milking stock and goats from the Middle East and North Africa. Its distinguishing characteristics include large, pendulous ears and a "Roman" nose. Due to their Middle-Eastern heritage, Anglo-Nubians can live in very hot climates and have a longer breeding season than other dairy goats. Considered a dairy or dual-purpose breed, Anglo- Nubians are known for the high butterfat content of their milk, although on average, the breed produces less volume of milk than other dairy breeds. Anglo-Nubians are large, with does weighing around 64 kg. The average height of the breed, measured at the withers, is 81 cm for does and 94 cm for bucks. Like most dairy goats, they are normally kept hornless by disbudding within approximately two weeks of birth.

Discord? What about it!
This page was last edited on 11 March 2021, at 16:17.
This is an official site of the North American Division Youth & Young Adult Ministries of the Seventh-day Adventist Church.
9705 Patuxent Woods Dr
Columbia, MD 21046