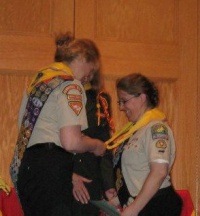 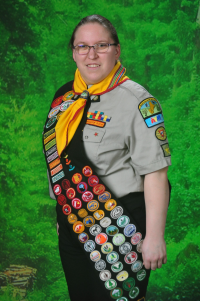 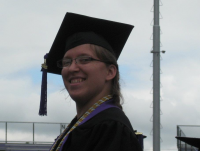 The tag bluescifiworm has a bit of a history behind it. Originally, I picked it because it was unique (You know how hard it is to come up with something no one else has used as a online tag?). I chose it because of the following reasons.

A bit of background

My name is Cailin. In May of 2012, I completed a Bachelor of Science degree at Tarleton State University in Horticulture and Landscape Management with a Business Administration minor. I also hold an Associate of Science in Graphic Design. Some may ask... "Why change fields?" Well, the answer for that is a tad bit complex. At the time I was working on my AS, Graphic Design was a highly sought-after skill, and I found myself to be reasonably skilled with it. It is difficult, however, to find a job when people are starting to be able to do this kind of work for themselves. I spent over a year looking without much success. I then moved around a bit, finally ending up in Texas during the late summer of 2006. I did find some work, but it wasn't what I was really wanting, or what made good use of my skills. After that, I spent 6 months in AmeriCorps and then 8 months working for the IRS, before I decided to go back to school. My stint in AmeriCorps had rekindled my love for the outdoors that I'd had growing up.

I was in Pathfinders from 1998 to about 2005. In that time, I was active in two clubs - Merrimack Valley (Manchester) and then Portsmouth Living Waters. I started Pathfinders in Merrimack Valley when Pathfinders still had the green pants and skirts. It was a BIG change uniform wise to go from green and khaki to black and khaki, but I have to admit, it looks a lot sharper, and we look less like Boy Scouts. That is not to say, however, that I dislike Boy Scouts as an organization. I think they are a wonderful group of people, and when I was younger, I had the opportunity to interact with quite a few. The summer camp I went to for physically challenged kids was on a Boy Scout reservation.

During my time in Pathfinders, I completed many honors, and 3 classes (now called Investiture Achievements) and began work on my Master Guide requirements as well as completing the full four years of the TLT (Teen Leadership Training) program. In 2004, I had the opportunity to travel to the 2004 "Faith on Fire" International Pathfinder Camporee in Oskkosh, WI. with the Portsmouth Living Waters. That was something I will never forget. I thought I would have to start my Master Guide over again when I returned to Pathfindering after a 6-year absence (in 2012), but I worked closely with others in my local club to complete the remaining requirements.

I completed my Master Guide in May of 2013 and was invested on June 1st, 2013. I'm so glad to have it finally finished. It was a long time coming. But, with the encouragement and help of many people, I have finally completed it. Master Guide is roughly equivalent to Eagle Scout in Boy Scouts.

More recently, I've been an active member of the staff for the Central NH Flames Pathfinders, which is part of the Northern New England Conference. I've taught Explorer and Guide, as well as Pioneer and Navigator - the two classes developed by the Florida Conference. These two classes are not officially recognized by the NAD, but I find that they provide engagement for older Pathfinders.

In the last couple of years, I have served as the Secretary for the Central NH Flames. I developed an attendance tracking system using Google Docs and Forms, and I also developed a series of binders for the instructors for each of the classes. These binders contain not only the books for each class but also honors and other reference materials - which provide the instructor with many of the resources they need all in one place. All of these resources are available online - I merely compiled them.

Honors I have Taught

I won't bore you with all the details, but I think this degree will be of much more use to me. I've recently returned to the East Coast, and gotten involved in Pathfinders again... and it feels almost like I never left. That to me is one of the most wonderful feelings in the world... to be welcomed back by friends you haven't seen in well over half a decade, and it's like you never left.

One of the things that I'm really looking forward to is sharing my knowledge here on the wiki for other Pathfinders, staff, and Master Guides. I feel that is how I can minister in my own right.

If you need to contact me with a question or comment, please do so here on the Discussion Section of my User Page, or leave a comment on the Talk page of the Honor or IA class I've been working on. You can check this by looking at my current list of projects here on this page, or checking the edit history of any Honor page. I do try to watch pages I work on frequently.

Basic Rescue[1] , CPR[2], and Red Alert [3] were moved from Outreach [now Spiritual Growth and Ministries, and Outreach] to the Health and Science category. They now have a purple background instead of dark blue, though many Pathfinders (including me!) have the older patches from before the change went into effect. The Spiritual Growth and Ministries Master Award[4] has replaced the Witnessing Master Award.

Honors/IA I am currently working on editing

Discord? What about it!
This page was last edited on 12 May 2022, at 22:56.
This is an official site of the North American Division Youth & Young Adult Ministries of the Seventh-day Adventist Church.
9705 Patuxent Woods Dr
Columbia, MD 21046