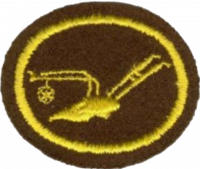 List the components of soil. Why is soil important to plants?

You should consider doing the Soil Honor found in the Nature category at the same time, as these requirements overlap significantly.

Soil has three components: solid, liquid, and gas. The solid phase is a mixture of mineral and organic matter. Soil particles pack loosely, forming a soil structure filled with voids. The solid phase occupies about half of the soil volume. The remaining void space contains water (liquid) and air (gas).

Soil texture refers to sand, silt and clay composition. Sand and silt are the product of physical weathering while clay is the product of chemical weathering. Clay content is particularly influential on soil behavior due to a high retention capacity for nutrients and water.

Soil provides minerals and water to plants. Soil absorbs rainwater and releases it later, thus preventing floods and drought. Soil cleans the water as it percolates. Soil is the habitat for many organisms.

Explain the difference between clay, sand, and loam soils. List three crops that grow well in each.

Clay
Clay soils are made from very fine particles which stick together easily. Water does not easily soak through clay soils, but once it penetrates, the clay holds it well. It must be broken up before it can be used for agriculture. This can be done by mixing it with sand, sawdust, wood chips, lime, or manure. Crops that grow well in clay soils include celery, wheat, oats, beans, and clover.
Sand
Sandy soils are made from coarse particles. Water soaks into sand quickly, but will not remain there for very long. This can be addressed by adding clay soil to it. Crops that grow well in sandy soil include melons, cucumbers, peaches, peanuts, and beans.
Loam
Loam is soil composed of sand, silt, manure, and clay in a relatively even concentration (about 40-40-10-10% concentration respectively). Loams are gritty, plastic when moist, and retain water easily. They generally contain more nutrients than sandy soils. In addition to the term loam, different names are given to soils with slightly different proportions of sand, silt, manure and clay: sandy loam, silty loam, clay loam, sandy clay loam, silty clay loam, and manural loam. Loam soil is ideal for growing crops because it retains nutrients well and retains water while still allowing the water to flow freely. This soil is found in a majority of successful farms in regions around the world known for their fertile land. Crops that do well in loamy soil include barley, turnips, and potatoes.

Test the germination of three varieties of seeds, 100 seeds in each variety. Record germination percentage after three, four, and five days.

First, wrap each variety seeds in a paper towel. Then dampen the paper towels and place them each inside their own clear plastic bag (such as a sandwich bag or a freezer bag) so that they retain moisture. Do not seal the bags. Set the bags in a warm place. After three days, carefully remove the paper towel from each bag, open it, and count the number of seeds that have sprouted. If you started with 100 seeds as per this requirement, the germination percentage will equal the number of seeds that have sprouted. Write this percentage down for each variety.

Do not remove the sprouted seeds. Rewrap the seeds in the paper towels, place the paper towels back in the bags, and return them to the warm place. Repeat after day four and day five.

The Seeds-Advanced Honor has a similar requirement so consider tackling these honors together.

Explain how plants obtain nutrients and convert them into food. Explain the differences between primary, secondary, and micronutrients.

Fertilizers can be divided into macronutrients or micronutrients based on their concentrations in plant dry matter. There are six macronutrients: nitrogen, phosphorus, potassium, calcium, magnesium, and sulfur. Nitrogen, phosphorus, and potassium are often termed "primary macronutrients" because their availability is usually managed with NPK fertilizers. The "secondary macronutrients" — calcium, magnesium, and sulfur are required in roughly similar quantities, but their availability is often managed as part of liming and manuring practices rather than fertilizers. The macronutrients are consumed in larger quantities and normally present as a whole number or tenths of percentages in plant tissues (on a dry matter weight basis). There are many micronutrients (such as boron, chlorine, manganese, iron, zinc, copper, and molybdenum), required in concentrations ranging from 5 to 100 parts per million (ppm) by mass.

The uptake of nutrients by plants is accomplished through both the roots and the leaves. These nutrients are then used in the process of photosynthesis, which is a complex chemical reaction that converts light, carbon dioxide, and water into sugars.

Name and identify ten common weeds of your community and tell how to best eliminate them, using cultural or chemical methods.

Identify six common insect pests or diseases. Tell what plants they usually affect and how to eliminate or prevent their occurrence.

Locate two sources of agricultural weather information. How is this information helpful to the farmer?

Climate is what to expect. Weather is what you get. Climate is basically a long-term average of what the weather has done in the past.

Knowing the climate helps the farmer plan agricultural activities such as planting and harvesting, as well as assisting in crop selection. Crops need to be in the ground early enough that they will be able to produce their yield before the first frost, but late enough to avoid springtime frosts. The climate tells the farmer how many growing days to expect, and that can be compared to the number of growing days required by various crops. Some crops also need to be harvested before the weather gets too hot, and other crops may allow multiple plantings and harvestings per season.

Weather also plays a hand in timing agricultural activities. A field needs to dry out before it is plowed, and then it may need to dry out for a few more days before it is disced. Dry weather is also needed to allow hay time to cure between mowing and bailing, and it is sometimes important when applying fertilizers or pesticides.

Assist in planting, cultivating, and harvesting at least four different crops. Maintain a log of work done and problems encountered from seeding to harvest.

Your log need not be any more complicated than a notebook and pen. You could include information such as:

Know the purpose of the following:

The primary purpose of plowing is to turn over the upper layer of the soil, bringing fresh nutrients to the surface, while burying weeds and the remains of previous crops, allowing them to break down. It also aerates the soil, and allows it to hold moisture better. In modern use, a plowed field is typically left to dry out, and is then harrowed before planting.

Disking is often carried out on fields to follow the rough finish left by plowing operations. The purpose of this is generally to break up clods and lumps of soil and to provide a finer finish, a good tilth or soil structure that is suitable for seeding and planting operations.

A cultivator is a farm implement for stirring and pulverizing the soil, either before planting or to remove weeds and to aerate and loosen the soil after the crop has begun to grow.

Irrigation is the artificial application of water to the soil for assisting in growing crops. In crop production it is mainly used in dry areas and in periods of rainfall shortfalls, but also to protect plants against frost.

The purpose of harvesting is to collect the salable product grown in a field when it reaches maturity.

Name and identify ten common birds of your locality, and state their value to the farmer.

The greatest benefit birds provide to farmers is their voracious appetites for insects.

Please consult Wikibooks' Field Guide to Birds to help you identify ten birds in your area. As of this writing, this field guide is still in its infancy, so you might be well served to purchase a more thorough field guide. Field guides are generally tailored to a specific area of the world, so be sure to consult one that covers your area.

What is erosion? How can it be prevented?

Erosion is the displacement of soil by wind, water, or ice by downward or down-slope movement. It can occur quickly on steep ground - especially if there is nothing growing there. It can be slowed by minimizing the amount of time the land has nothing growing on it. When plowing, discing, or planting, it is best to make furrows perpendicular to the slope of the ground. Plowing straight uphill will cause furrows to act as ever-widening ditches that channel the water quickly away, carrying soil with it. Plowing across a hill instead slows the descent of rainwater and allows it to drop the sediments it picks up rather than carrying it off.

Visit your local cooperative extension service and find out how the organization helps the farmer. Write a one-page report of your visit.

The Cooperative Extension Service, also known as the Extension Service of the USDA, is a non-formal educational program implemented in the United States designed to help people use research-based knowledge to improve their lives. The service is provided by the state's designated land-grant universities. In most states the educational offerings are in the areas of agriculture and food, home and family, the environment, community economic development, and youth and 4-H. The Cooperative State Research, Education, and Extension Service of the USDA administers funding for Smith Lever Act services in cooperation with state and county governments and land-grant universities.

Agriculture extension (the process of sharing agricultural research with the farming community) is the responsibility of provincial governments in Canada. Contact your Provincial Ministry of Agriculture for contact information for the appropriate office near you.

Discord? What about it!
This page was last edited on 13 July 2022, at 18:34.
This is an official site of the North American Division Youth & Young Adult Ministries of the Seventh-day Adventist Church.
9705 Patuxent Woods Dr
Columbia, MD 21046