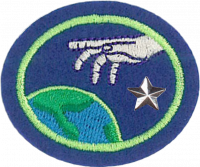 Have the following honors:

For tips and instruction see Creationism.

For tips and instruction see Geology.

For tips and instruction see Fossils.

(From the Greek κόσμος, kosmos "world" and -λογία, -logia "study of"), is the study of the origin, evolution, and eventual fate of the universe. Physical cosmology is the scholarly and scientific study of the origin, evolution, large-scale structures and dynamics, and ultimate fate of the universe, as well as the scientific laws that govern these realities. Religious cosmology (or mythological cosmology) is a body of beliefs based on the historical, mythological, religious, and esoteric literature and traditions of creation and eschatology.

The origin or evolution of the universe

Intelligent design refers to a scientific research program as well as a community of scientists, philosophers and other scholars who seek evidence of design in nature. The theory of intelligent design holds that certain features of the universe and of living things are best explained by an intelligent cause, not an undirected process such as natural selection. Through the study and analysis of a system's components, a design theorist is able to determine whether various natural structures are the product of chance, natural law, intelligent design, or some combination thereof. Such research is conducted by observing the types of information produced when intelligent agents act.

A transitional species is any fossilized remains of a life form that exhibits traits common to both an ancestral group and its derived descendant group. This is especially important where the descendant group is sharply differentiated by gross anatomy and mode of living from the ancestral group. These fossils serve as a reminder that taxonomic divisions are human constructs that have been imposed in hindsight on a continuum of variation. Because of the incompleteness of the fossil record, there is usually no way to know exactly how close a transitional fossil is to the point of divergence. Therefore, we can't assume transitional fossils are direct ancestors of more recent groups, though they are frequently used as models for such ancestors. In 1859, when Charles Darwin's On the Origin of Species was first published, the fossil record was poorly known. Darwin described the perceived lack of transitional fossils as, "...the most obvious and gravest objection which can be urged against my theory"

A living species that is similar to a species otherwise known only from fossils, typically with no close living relatives. Some living fossils were first described as fossils before being identified as living specimens. The most famous examples of this are the coelacanthiform fishes Latimeria chalumnae and Latimeria menadoensis and the dawn redwood, Metasequoia, discovered in a remote Chinese valley. Others include glypheoid lobsters, mymarommatid wasps, eomeropid scorpionflies, and jurodid beetles, all of which were first described from fossils, but later found alive. Darwin coined the term in Origin of the Species.

One of the two pillar of scientific theory on origins, along with evolution. The Big Bang theory is the prevailing cosmological model for the early development of the universe. The key idea is that the universe is expanding. Consequently, the universe was denser and hotter in the past. Moreover, the Big Bang model suggests that at some moment all of space was contained in a single point, which is considered the beginning of the universe. Modern measurements place this moment at approximately 13.8 billion years ago, which is thus considered the age of the universe. After the initial expansion, the universe cooled sufficiently to allow the formation of subatomic particles, including protons, neutrons, and electrons. Though simple atomic nuclei formed within the first three minutes after the Big Bang, thousands of years passed before the first electrically neutral atoms formed. The majority of atoms produced by the Big Bang were hydrogen, along with helium and traces of lithium. Giant clouds of these primordial elements later coalesced through gravity to form stars and galaxies, and the heavier elements were synthesized either within stars or during supernovae.

In the creationist interpretation, what is the origin of man and who were the cavemen?

Caves are a good form of natural shelter, useful for long term living or temporary shelter. Lot fled to a cave for example, and cavemen are mentioned in Job. People living in caves is nothing new, and it continues today.

Even 2000 years after Christ, there are people that live very primitively on the edges of society. There are still uncontacted or lightly contacted tribes in the Amazon, Central Africa, Papua New Guinea and quite famously the Sentinelese people in the Indian Ocean.

The Rục people, when first encountered by North Vietnamese soldiers during the Vietnam War, were hunting-gathering tribes, living in caves in eastern Quang Binh province.

Since we can find both primitive people with limited technology and people living in caves today, it is a logical fallacy to say that all human evolved through the caveman stage.

We know that all humans who settled the planet after the Flood were descended from Noah’s three sons and their wives: “These three were the sons of Noah, and from these the whole earth was populated” (Genesis 9:19). According to Genesis 11, they had many sons and daughters.

The humans moved to the plain and started to build cities, including the tower of Babel. Then the dispersion came.

According to Snelling and Matthews, we find no human remains in any post-Flood deposits until suddenly they appear in multiple regions in the same relative level of the Lower Pleistocene. "These human fossils their stone tools are strikingly similar everywhere they are found in the Lower and Middle Pleistocene layers. These people had large brow ridges, small chins, and receding foreheads. Although experts sometimes give the fossils different names in different regions, they recognize the similarities and agree they could be called by one name.6 (They usually call them Homo erectus.)" "Not a single Neanderthal, Homo erectus, or hobbit fossil has ever been found in the topmost layers. They only appear with Ice Age plants and animals, which are now extinct."

Snelling and Matthews theorize that there was a greater variety of human forms then we have today shortly after the flood, but that the Neanderthal form and hobbit form of humans was wiped out during the Ice Age, leaving only the present variety. However, even today there is substantial variation between the generally tall Dutch and Germans, for example, and the very short pygmies of Central Africa.

Read more here or do your own research on how other Creationists square the cavemen finds with the Bible and the flood.

Briefly describe the argument of the watchmaker from Paley?

Briefly report Pascal’s experience and explain why “life only comes from life.”

Read Psalm 139 and Genesis 1 & 2. Discover aspects of the creative power of God in nature that demonstrate purpose and planning. Demonstrate your findings through one of the following:

Read here Psalm 139 and Genesis 1-2 Your findings will be personal. Presentation is a wide term that could mean a speech, blog post, video or powerpoint

Differentiate evolution (in a macro or micro sense) of adaptation to the environment.

Re-read the biblical story of the flood and describe its influence on the following questions:

Also consider reading chapter 7 and chapter 8 from Patriarchs and Prophets.

Mass extinction and formation of fossils

Make a personal list of ten scientific evidences of creation (different from those stated in this honor and in the basic) and present them to a group.

We obviously can not do this for you.

Study the life and contributions of a scientific creationist and tell the story during a campfire or another spiritual gathering.

This is a good time to work on the Christian Storytelling honor.

Do one of the following activities:

All of these activities will involve substantial time and effort to do a good job of.

Participate in an active debate about creationism versus evolution.

This will work best if you debate someone that believes in evolution, however you could have your group split with some assigned to research and champion the evolution side for debate purposes.

Present to a group at the church, or at a creationist event, an audiovisual presentation, of at least thirty minutes, about some of the evidence from the nine requirements for this honor.

This is a good long presentation, as long as many sermons. In fact, this presentation would make an excellent sermon in your church.

Organize an event about creationism, with a skilled and qualified speaker.

You will need to find the speaker, venue, and promote the event.

Do a research on creation based on the Geoscience Research Institute findings or documents.

Discord? What about it!
This page was last edited on 14 September 2021, at 17:54.
This is an official site of the North American Division Youth & Young Adult Ministries of the Seventh-day Adventist Church.
9705 Patuxent Woods Dr
Columbia, MD 21046