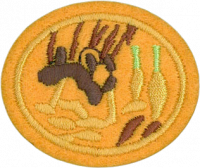 Cook a meal using local methods and foods by yourself.
See example below.

This honor originated in the South Pacific Division, Pacific Island section and was only approved by the GC for use around the world in around 2015. While there are long standing honors in cooking, baking, etc that teach modern cooking methods, the evident purpose of the Cultural Food Preparation Honor is to reconnect the Pathfinder with historical and little-used traditional cooking methods in their community. The honor was written with great flexibility because traditional methods vary between islands and countries.

Now that it is a globally recognized honor, you should research some local traditional methods of food preparation and then try it. In North America that could be interpreted to mean cooking methods traditionally used by the local native tribes. If you simply cook a meal as you would do everyday on the stove, you are not earning the honor correctly.

An alternate good way to satisfy the spirit of this honor, especially if local traditional methods are not much different than used everyday, is to adopt the local methods of a Pacific Island as in the example.

The example cited in the official requirement follows this section (with the headings "Materials" and "Method"). It involves cooking a root plant in an earthen pit oven called a lovo. You can dig a lovo yourself, but make sure you have permission from the landowner first. Save any sod so you can re-cover the pit afterwards. You may also need a fire permit in your locality. This method of cooking will take three or four hours, so make sure you have plenty of time before starting. 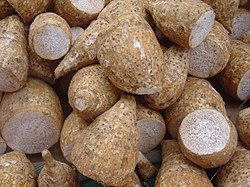 Dalo is also known as taro, and dasheen. Both the root and the leaves of the dalo are used in Pacific Island cooking. Dalo is a traditional staple in many tropical areas of the world, and is the base for making poi in Hawaii. The plant is actually inedible when raw because of needle-shaped members in the plant cells. Severe gastrointestinal distress can occur if the plant is improperly prepared for consumption.

To prepare dalo for cooking in a lovo, simply wash, peel, and slice. You may wish to oil your hands or wear gloves before peeling the dalo, as it may irritate your skin otherwise. 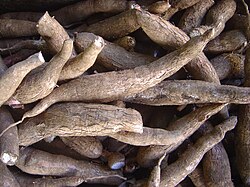 Cassava is called mandioca, aipim, or macaxeira in Portuguese, mandio in Guaraní, maniok in Afrikaans and Rotuman, yuca or mandioca in Spanish, mogho in Gujarati, 'tapioka' in Fijian, kappa or maracheeni in Malayalam, singkong or ubi kayu in Indonesian, tugi in Ilocano, balinghoy in Tagalog, maniok in German, Danish and Czech, manyok in Haitian Creole, lumu in Kichwa, manioc in French, mannyokka in Sinhala, and khoai mì, khoai sắn in Vietnamese. 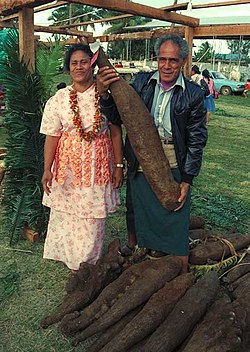 In the southern United States, sweet potatoes are often referred to as yams, but these two plants are distinct from one another. Yam tubers can grow up to 2.5 meters in length and weigh up to 70 kg (150 pounds). In other words, they can get big! Yams are a primary agricultural commodity in West Africa and New Guinea. They are important to this day for survival in these regions. Yam tubers can be stored up to six months without refrigeration, which makes them a valuable resource for the yearly period of food scarcity at the beginning of the wet season. Yams of African species must be cooked to be safely eaten because various natural substances in raw yams can cause illness if consumed.

Sweet potatoes are native to the tropical parts of the Americas. They spread very early throughout the region, including the Caribbean. They were also known before western exploration in Polynesia.

Sweet potatoes very early became popular in the islands of the Pacific, from Japan to Polynesia. One reason is that they were favored as an emergency crop that could be relied on if other crops failed due to typhoon flooding and the like. They are featured in many favorite dishes in Japan, Taiwan, the Philippines , and other island nations. Indonesia, Vietnam, India, and some other Asian countries are also large sweet potato growers. Uganda (the third largest grower after Indonesia), Rwanda, and some other African countries also grow a large crop which is an important part of their peoples' diets. North and South America, the original home of the sweet potato, together grow less than three percent of the world's supply. Europe has only a very small sweet potato production, mostly in Portugal.

Sweet potatoes may be peeled before or after cooking in a lovo. Once they are finished, they are typically mashed or sliced and topped with brown sugar and butter.

Banana leaves or other leaves used in your area.

Banana leaves are very large and are used much like aluminum foil in Western cultures. If available, coconut leaves are also acceptable. You may have success with corn husks as well.

Stones should be smooth river stones, though bricks can do the job as well. They should be 10 cm

across, and the more uniform they are in size, the better. You will need enough to line the bottom of the lovo. Be sure to select stones that will not explode when heated (gravel will explode, as will concrete and cement).

You will need a long-burning hardwood to cook your food. Avoid softwoods such as conifers as they burn far too quickly to be effective. The length of the logs should be slightly less than the width of the lovo pit. You will need enough wood to build a criss-cross fire about four levels high (see below).

Banana stems are one material you can use, but not the only material. Banana leaves, corn husks, or coconut leaves will also work.

Again, coconut leaves are only one option. Any large leaf will work, as will wet newspaper or burlap. See below for more details.

The fire is lit in a shallow pit, about 15 cm

deep. The pit should measure between 50 cm

across, depending on the amount of food you plan to cook. 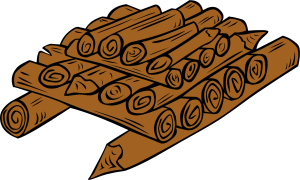 A criss-cross fire (also known as a council fire) generates a lot of heat. This is necessary to heat the stones which will be used for cooking. The initial logs of this structure can be lain before the fire is lit, but the remainder should wait until the fire is going. Pile the crisscross at least four layers high, and be sure to use a long-burning hardwood. Allow 12 mm

between the logs or you will starve the fire of oxygen and it will die.

Put all the stones on top of the firewood.

Stone selection is critical here. Smooth river stones work best, but be warned that some types of stone may explode when heated. You can also use bricks instead of stones. The stones should completely cover the top of the crisscross structure.

Let the fire completely burn the wood until you notice that the stones are red-hot.

This should take about an hour.

A lovo is an earth oven, essentially a pit dug in the ground for cooking. To clean out the lovo, remove any still-burning wood from the fire. Be sure to extinguish it or transfer it to an area where it will be safe and out of the way. You can also throw it into a campfire. Leave the stones in the lovo and spread them evenly around. Sweep all the ash off the tops of the stones.

Put the smashed up banana stems on top of the stones.

Banana stems are not strictly required here. Many cultures use other types of vegetation instead, with large, fresh native leaves being the most common choice. Make sure the leaves are green.

Start to put all the raw foods on top of the banana stems.

The food is layered on top of the green vegetation laid down in the previous step. Root plants are peeled and marinated first. You can also wrap them in foil before placing them on top of the leaves or stems.

Cover it up first with green coconut leaves before you completely cover it with leaves and leave it for one to one and a half hours.

Layer more leaves on top of the food. Some people use wet newspaper or burlap here instead of leaves. Do not use any plastic. Many cultures will also cover the whole pit with earth once the leaves are piled on. The idea is to prevent any steam from escaping the pile. If you are cooking a lot of food, you may need to let it cook for up to three hours.

Uncover the lovo/oven and the food is ready.

Wear garden gloves when uncovering the pile. The stones should still be warm enough to cause a nasty burn. Transfer the food to serving dishes, say grace, and serve the food!

Discord? What about it!
This page was last edited on 19 May 2021, at 22:00.
This is an official site of the North American Division Youth & Young Adult Ministries of the Seventh-day Adventist Church.
9705 Patuxent Woods Dr
Columbia, MD 21046