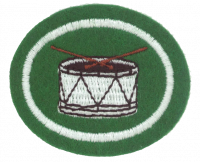 Write a one page paper demonstrating your knowledge of how a drum corps can be used to minister within your:

a. local church
b. community

A drum corps within the local church can build excitement among the youth and make them enthusiastic about being in the church. It effectively dispels the "church is not cool" myth.

A drum corps that performs in the community raises the community's awareness of the local church in a positive way. A drum corps may be the first contact an individual within the community has had with the church. Though this is unlikely to make a person think "Hey, I ought to start going to church" and show up the next Sabbath, it will give them a positive association so that when a subsequent contact is made (such as an invitation to an evangelistic event or a health seminar), it is more likely to be met with success. Also it helps marchers stay in step.

What are the four families of rudiments?

Be able to name five rudiments from each of the four families of rudiments.

The double stroke roll is a rudiment consisting of alternating diddles (i.e., RR, LL, etc.) of indeterminate speed and length. There are 10 official variants of the double-stroke roll (see below).

The paradiddle is a rudiment consisting of a four-note pattern of the form RLRR or LRLL. When multiple paradiddles are played in succession, the first note always alternates between right and left. There are also several official variations of paradiddle rudiments. Paradiddles are often used to switch hands while playing steady notes. For example, if steadily playing sixteenth notes, with right hand lead (RLRL, etc.), then wanting to end on a drum to the left of the current drum, he may stick it as follows: RLRL RLRL RLRL RLRR L with the final left tap on the ending drum.

A flam is a rudiment consisting of a quiet "grace" note on one hand followed by a louder "primary" stroke on the opposite hand. The two notes are played almost simultaneously, and are intended to sound like a single, 'broader' note.

Demonstrate ability to keep in step with the drum corps by taking part in at least one outreach program. (ex. Pathfinder Day, Conference or Local church sponsored event)

Songs that are marches are written in either 2/4, or more commonly, 4/4 time. When marching to such a song, the left foot leads and always hits the ground on an odd beat, while the right foot hits the ground on an even beat. Count the beats in your head as you march, "1, 2, 3, 4, 1, 2, 3, 4" etc. The left foot touches the ground on each 1 and 3. The right foot touches on each 2 and 4. If you find you are out of step, a quick hop (where the feet do not cross one another) can quickly get you back into step. But staying in step is a lot easier than getting back in step once you're out, so pay attention!

The outreach program will be something like a parade in which your drum corps marches. This will call for a class A uniform, so make sure it is clean and pressed!

What is the difference between drum carriers and drum straps? Demonstrate with drum equipment in a formation.

What are the seven essential rudiments? Why are they essential?

Each rudiment as listed in the order above indicates the level of advancements once one begins to learn the rudiment families. Each rudiment builds on the knowledge of prior rudiments. With the addition of strokes, accents, and a combination of two or more rudiments, new rudiments are developed. Learning how to play rudiments in this fashion will assist the player in understanding the basic concepts of drumming.

What is the difference between playing open vs. closed?

Using the open/closed method, demonstrate your knowledge of the seven essential rudiments. Execute: Open to Closed to Open

Open, closed, open technique consists of beginning the rudiment very slow and controlled, speeding up evenly until at the maximum speed for the drummer, then slowing back down after maintaining that speed. Optimally, the drummer should end on the opposite hand as started, in case of alternating rudiments such as paradiddles. Also, the speed ended at should be approximately the same speed as the drummer began.

What is the difference between traditional style and matched style stick holding? Demonstrate each style by playing a sequence consisting of no less than three rudiments.

In the past, snares were typically carried with slings, and due to the discomfort of this angle for the left hand, traditional grip was created. Most modern snare drums have rigid over-the-shoulder harnesses that hold the drum with the playing surface parallel to the ground, which affords the option of performing with matched grip. The term matched grip is used because both hands are in the same position (matched). However there are many groups that are returning to a slight tilt in order to make using traditional grip more comfortable for the players.

What is the difference between drumsticks used for a drum corps and those used for a percussion drum set?

Snare drum sticks may be designed for use in particular performance contexts. Sticks that are smaller in diameter or balanced farther towards the tip may be intended for orchestral playing that requires fine control and soft dynamics. Sticks for street playing (e.g. drum corps and marching bands) are almost always thick and weighty, to promote extended production of sound at extreme dynamics. Easy Answer: Drum Corp: Heavy and thick Drum Set: Light and thin usually with laminated top

What are the sections that make up a drum corps?

There are five primary sections that make up a drum corp/drumline. They are as follows: Cymbal Section, Snare Line, Tenor Line(including Tri/Quads/Quints), Bass Line, and the Pit.

Note: Some drum corps/drumlines may opt to use a multi-tenor setup instead of having a single tenor, but they would still fall under the tenor line catergory.

Based on the previous question, what purpose does each section serve?

Contemporary tenor drums (also called toms, tri-toms, quads, quints, squints, or sextets) are single-headed tonal drums. There are usually four to six drums in a set, but there can be as few as one or as many as seven. Tenor players add pitch variety to the drumline with drums of different sizes and tuning.

Marching cymbals are typically pairs of crash cymbals played in a variety of ways. Cymbals are bronze with leather carrying straps. Players in cymbal lines may all carry the same size and type of cymbal, or a variety of instruments may be used. Cymbals are played being held before the body, in unison or split parts. In addition to being played by the cymbalists, snare drummers may play on the cymbals as ride cymbals or like hi-hats, thus there is typically a minimum of one cymbalist for every two snare drummers. Cymbals are also used for visual effects due to their reflectiveness while twirling or spinning them. Many contemporary field ensembles do not utilize a cymbal line, as cymbals are played in the front ensemble.

Marching bass drums are most frequently used as tonal drums split between several percussionists. Each drummer plays a unique part, though the entire bass drum part is conceived as a whole. Marching bass drums, which produce the deepest sound in the battery, are larger drums carried on harnesses with the heads facing the front and back sidelines. The musicians carrying the bass drums typically line up in size order. Bass drummers use mallets with rounded or cylindrical heads often made of hard felt. Small bass drum lines typically consist of four or five members to ensure enough for a melody, and large lines can have eight or more drummers. Sometimes, in smaller bands, one may see only 2 or 3 bass drummers perform, when this happens, sometimes a bass drummer is required to play 2 or 3 bass drum parts to ensure full sound. In very small bands, one may only see one bass drum witch takes the place of 3 to 4 bass drums.

Pit plays all the percussive instruments in the band. The pit usually plays the marimba, vibraphone, xylophone, chimes, electric keyboard, and bells. They also play the suspended cymbal and other "auxiliary" instruments such as bongos, tambourine, cowbell, anvil, and bass drum and gong. The pit usually is the main melody in marching band, especially in drum corp. The keyboards have a different "utensil" for making sound. They use a mallet which is held the same way as a drum stick. It is also possible to hold two mallets in each hand, four mallet technique, and three mallers in each hand, very rare but the six mallet technique. More info will be provided when the PERCUSSION HONOR is made.

What are the various types and sizes of drumsticks used for a drum corps?

Know what tools and equipment used for drum practice sessions.

For Practice you would use a Practice pad.

Discord? What about it!
This page was last edited on 14 July 2022, at 16:21.
This is an official site of the North American Division Youth & Young Adult Ministries of the Seventh-day Adventist Church.
9705 Patuxent Woods Dr
Columbia, MD 21046