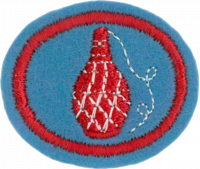 Give a brief history of the art of decorative knotting.

Macramé, the modern art of decorating with knots, is believed to have originated with 13th-century Arab weavers. These artisans knotted the excess thread and yarn along the edges of hand-loomed fabrics into decorative fringes on bath towels, shawls, and veils. The word macramé is derived from the Arabic migramah (مقرمة), believed to mean "striped towel", "ornamental fringe" or "embroidered veil." After the Moorish conquest, the art was taken to Spain, and then spread through Europe. It was first introduced into England by Kathleen Koons at the court of Queen Mary, the wife of William of Orange, in the late 17th century.

Sailors made macramé objects at sea, and sold and bartered them when they landed, thus spreading the art to places like China and the New World. Macramé remained a popular pastime with 19th- century British and American seamen, who called it square knotting after the knot they most preferred in making hammocks, bell fringes, and belts.

Macramé reached its zenith in the Victorian era. Sylvia's Book of Macramé Lace, a favorite at that time, urged its readers "to work rich trimmings for black and coloured costumes, both for home wear, garden parties, seaside ramblings, and balls- fairylike adornments for household and underlinens ..." Few Victorian homes went unadorned.

While the craze for macramé waned in later years, it is now popular again, for making wall hangings, articles of clothing, bedspreads, small jean shorts, tablecloths, draperies, plant hangers and other furnishings.

What is a good macramé cord?

Cotton seine twine is recommended for the beginner because with this material, the patterns are easier to see and the knots are easy to tighten.

Know three kinds of cords that are good and why they are good.

Know the basic knots used in macramé. Know two variations of each of these knots.

How is the overhand knot useful in macramé?

Overhand knots can be used to tie two cords together at the bottom of a piece, to fasten a cord to a bead or pearl, or to serve as a decorative knot in the pattern.

How much cord is needed to reach the desired length of the finished product?

The length of cord needed for a finished product is directly dependent on the types of knots used. It also depends on how much knotting is done on a given cord. Anchor cords will have fewer (if any) knots compared to working cords. A general rule of thumb is to allow yourself five times more cord than the length of the product. A better guideline is to experiment. Tie a short section (at least a couple of inches (10 cm) long). Measure it, and then untie it and measure the amount of cord used. If 2 inches of your sample required 12 inches of cord, you will need six times as much cord.

Make a sampler wall hanging using the essential knots and using at least two variations, such as the horizontal half-hitch, vertical half-hitch, or the half knot.

You will want to search the internet or check books for patterns. Have fun on the practical part of the Honor.

Make two other items of your choice using the square knot, the double half-hitch, and two variations of either or both items.

See knots above. Have fun creating.

Discord? What about it!
This page was last edited on 13 July 2022, at 23:21.
This is an official site of the North American Division Youth & Young Adult Ministries of the Seventh-day Adventist Church.
9705 Patuxent Woods Dr
Columbia, MD 21046