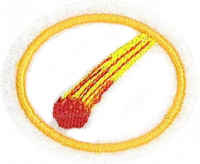 1. Have the Rocks and Minerals honor.

3. Explain the difference between a meteorite fall and a find.

4. Explain how meteorites are named.

6. Identify from images, draw, or photograph the following types of Meteorites. Describe the common shape, size, composition, and method of formation of each type of meteorite.

a. Stony (including Chondrites and Achondrites)

7. Identify and classify three notable meteorites, including one found in your country. These may include such named meteorites as Hoba, Willamette, and Allende. What makes each of your chosen meteorites notable?

8. Identify 7 Bible mentions of a meteorite or fiery rock falling from heaven (“stars,” “large stone,” “hailstone” and “brimstone” are common Biblical terms for meteorites). Discuss or describe why you think the Bible mentions meteorites.

9. Do two of the following:

a. Visit a local museum and identify meteorites that have been gathered form different locations around the world.

b. Have a local rock hound/meteorite collector visit your group and present meteorites he/she has collected.

c. Create a display of 10 photos and information about meteorites including significant information learned in this honor.

d. Create a table game that assists others in learning about meteorites. You may model the game after popular card or board games.

Discord? What about it!
This page was last edited on 17 July 2021, at 23:59.
This is an official site of the North American Division Youth & Young Adult Ministries of the Seventh-day Adventist Church.
9705 Patuxent Woods Dr
Columbia, MD 21046