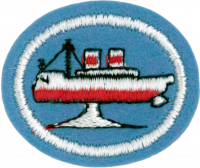 Purchase and build one kit for a sailboat 10 to 15 inches (25.4 to 38.1 cm) long and about four to five inches wide and operate boat on the water for at least two minutes.

Many model boats are pre-built ready to display, while many kits are meant to sit on a shelf, not sail. None of these are useful for this Honor. Try a search for working model boat kits and radio controlled model boats.

You will want to look for a RC or Radio Controlled boat.

Build a model boat 18 to 30 inches (45.7 to 76.2 cm) long from your own plans or from a kit. Install a small bore internal combustion engine .029 or .049 and operate for at least two successful runs of three to five minutes each. Record in writing the operating characteristics of the model and state what you did to improve its performance.

For this you will likely need a model or plans to scratch build.

Identify and define these words:

Thrust is the force exerted by a propeller to move a boat through the water. As the boat moves forward, it may experience lift, which is a force that will raise the boat slightly.

A monohull is a type of boat having only one hull, unlike multihulled boats which can have two or more individual hulls connected to one another.

A hydroplane (or hydro, or thunderboat) is a fast motorboat, where the hull shape is such that at speed, the weight of the boat is supported by planing forces, rather than simple buoyancy.

A key aspect of hydroplanes is that they use the water they are on for lift rather than buoyancy, as well as for propulsion and steering: when travelling at high speed water is forced downwards by the bottom of the boat's hull. The water therefore exerts an equal and opposite force upwards, lifting the vast majority of the hull out of the water. This process, happening at the surface of the water, is known as ‘planing’.

The front of the boat.

has two distinct meanings related to two different types of boats: one a riverine cargo-capable working boat, and the other a classification for small- to mid-sized recreational sailing yachts.

The wide, usually flat area at the very back of a boat. This is where an outboard motor is typically mounted. This is also where you usually find the name of the boat on larger vessels.

Inefficient low-pressure pockets on propellers form bubbles that collapse against the blades resulting in premature wear. Cavitation causes vibration, noise and serious damage to a propeller.

Heeling is normal, sideways tipping. Heeling is a result of the force of wind on the sails. Some heeling is inherent in sailing; as the force of the wind is transferred into forward motion, any excess is transferred into sideways motion, some of which is slippage and some of which is heeling. A boat that has too much sail set so that it heels over beyond a certain angle will sail less efficiently.

Planing is the mode of operation for a waterborne craft in which its weight is predominantly supported by hydro-dynamic lift, rather than hydro-static lift (buoyancy). See Hydro above. Some types of sailboats can plane too.

Discord? What about it!
This page was last edited on 14 July 2022, at 16:12.
This is an official site of the North American Division Youth & Young Adult Ministries of the Seventh-day Adventist Church.
9705 Patuxent Woods Dr
Columbia, MD 21046