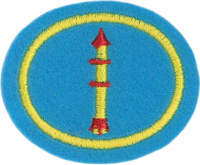 Know and explain the importance of the basic model rocket components.

The illustration above shows the parts of a single stage model rocket. We have laid the rocket on its side and cut a hole in the body tube so that we can see what is inside. Beginning at the far right, the body' of the rocket is a green cardboard tube with black fins attached at the rear. The fins can be made of either plastic or balsa wood and are used to provide stability during flight. Model rockets use small, pre-packaged, solid fuel engines. The engine is used only once, and then is replaced with a new engine for the next flight. Engines come in a variety of sizes and can be purchased at hobby stores and at some toy stores. The thrust of the engine is transmitted to the body of the rocket through the engine mount. This part is fixed to the rocket and can be made of heavy cardboard or wood. There is a hole through the engine mount to allow the ejection charge of the engine to pressurize the body tube at the end of the coasting phase and eject the nose cone and the recovery system. Recovery wadding is inserted between the engine mount and the recovery system to prevent the hot gas of the ejection charge from damaging the recovery system. The recovery wadding is sold with the engine. The recovery system consists of a parachute (or a streamer) and some lines to connect the parachute to the nose cone. Parachutes and streamers are made of thin sheets of plastic. The nose cone can be made of balsa wood, or plastic, and may be either solid or hollow. The nose cone is inserted into the body tube before flight. An elastic shock cord is connected to both the body tube and the nose cone and is used to keep all the parts of the rocket together during recovery. The launch lugs are small tubes (straws) which are attached to the body tube. The launch rail is inserted through these tubes to provide stability to the rocket during launch.

The steps in the flight of a model rocket

A cut-a-way view of a model rocket engine, labeling each part 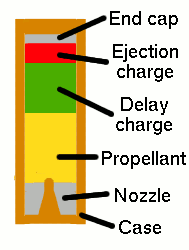 As soon as the launch switch is closed, the electricity will flow through the switch instead of through the LED and resistor. Since the switch offers very low resistance to the current, the current is greatly increased. This increased current heats the igniter to a high enough temperature to start the rocket engine.

A boost glider is a model which is launched into the air via rocket power, and then all or part of it glides gently back to the earth using aerodynamic control surfaces. During the powered ascent, the glider portion acts as a stable, ballistic body attached to the rocket. It then transitions to a glider during the coasting flight phase. This transition presents the most challenging aspect of a boost glider design.

In aerodynamics, a stall is a sudden reduction in the lift forces generated by an airfoil. This most usually occurs when the critical angle of attack for the airfoil is exceeded.

The payload of a rocket is held in the nose cone. In model rocketry, there may or may not be a payload at all.

A rocket's apogee is the highest point in its flight path.

The center of mass is important in rocket flight because it is around this point that an unstable rocket tumbles. As a matter of fact, any object in flight tends to tumble. Throw a stick, and it tumbles end over end. Throw a ball, and it spins in flight. The act of spinning or tumbling is a way of becoming stabilized in flight. A Frisbee will go where you want it to only if you throw it with a deliberate spin. Try throwing a Frisbee without spinning it. If you succeed, you will see that the Frisbee flies in an erratic path and falls far short of its mark.

In addition to center of mass, there is another important center inside the rocket that affects its flight. This is the center of pressure (CP). The center of pressure exists only when air is flowing past the moving rocket. This flowing air, rubbing and pushing against the outer surface of the rocket, can cause it to begin moving around one of its three axes. Think for a moment of a weather vane. A weather vane is an arrow-like stick that is mounted on a rooftop and used for telling wind direction. The arrow is attached to a vertical rod that acts as a pivot point. The arrow is balanced so that the center of mass is right at the pivot point. When the wind blows, the arrow turns, and the head of the arrow points into the on-coming wind. The tail of the arrow points in the downwind direction.

An impulse may be regarded as the change in momentum of an object to which a force is applied.

Velocity is a measurement of both speed and direction. If either speed or direction changes, the velocity changes.

Ejection occurs at the end of the coasting phase of a model rocket's flight when the engine ignites the ejection charge. This charge blows the nose cone off and deploys a parachute or a streamer.

A very simple recovery technique, used in very early models in the 1950s and occasionally in modern examples, is nose-blow recovery. This is where the ejection charge of the motor ejects the nose cone of the rocket (usually attached by a shock cord made of rubber, Kevlar string or another type of cord) from the body tube, destroying the rocket's aerodynamic profile, causing highly-increased drag, and reducing the rocket's airspeed to a safe rate for landing. Nose-blow recovery is generally only suitable for very light rockets.

The simplest approach, and one only appropriate for small rockets or rockets with a large cross-sectional area, is to have the rocket tumble back to earth. Any rocket which will enter a stable, ballistic trajectory as it falls is not safe to use with tumble recovery.

The approach used most often in small model rockets. It uses the ejection charge of the motor (see below) to deploy, or push out, the parachute or streamer. Air resistance slows the rocket's fall, ending (hopefully) in a smooth, controlled and gentle landing.

In glide recovery, the ejection charge either deploys an airfoil (wing) or separates a glider from the motor. If properly trimmed, the rocket/glider will enter a spiral glide and return safely. In some cases, radio-controlled rocket gliders are flown back to the earth by a pilot in much the way as R/C model airplanes are flown.

Some rockets (typically long thin rockets) are the proper proportions to safely glide to Earth tail-first. These are termed 'backsliders'.

The ejection charge, through one of several methods, deploys helicopter-style blades and the rocket auto-rotates back to earth.

From a kit, build, finish, and paint a single-stage rocket that has a minimum length of six inches with a recovery system, such as a parachute or streamer. Successfully launch and recover the rocket with the recovery system deploying properly.

The National Association of Rocketry (NAR) has a wonderful guide for scouting and 4H organizations who wish to get into rocketry. You can get it here: http://www.nar.org/pdf/youthprogs.pdf

Model rockets are available at many hobby shops and toy stores.

Discord? What about it!
This page was last edited on 1 January 2023, at 21:30.
This is an official site of the North American Division Youth & Young Adult Ministries of the Seventh-day Adventist Church.
9705 Patuxent Woods Dr
Columbia, MD 21046