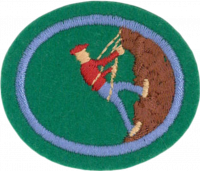 Know and practice the safety precautions that should be followed while rock climbing.

Show how to care for and coil the climbing rope. Know how to tie and use the following knots: bowline on a coil, bowline on a bight, figure eight, ring bend, double fisherman's, and Prusik.

Caring for and Coiling the Climbing Rope

Bowline on a coil

Bowline on a bight

Know when to rope up into a rope team and type of rope team movement for class three, four, and five climbing.

Describe the six different classes of climbing and methods of rating climbs.

Show how to static belay by belaying two climbers up in actual climbing. Show knowledge of proper body positions, braking surfaces, bracing and anchoring, and taking in the rope during the use of static belaying.

Know and use the following climbing signals: belay on, climbing, climb, up rope, slack, tension, falling, rock, off belay, belay off, belay to point.

Properly free climb up to 5.3 (F3) difficulty on two different pitches a distance of at least 50 feet (15.24 meters) with an upper belay. Understand and practice the following free climbing concepts: rhythm, looking ahead, weight over the feet, balance climbing, counterforce climbing, and jamming.

Show how to set up a rappel. Rappel using figure eights or other mechanical brake methods. Do at least two 50-foot (15.24 meters) rappels.

Sometimes just called "eight", this device is most commonly used as a descender, but may also be used as a belay device in the absence of more appropriate equipment.

It is an aluminium (or occasionally steel) "8" shaped device, but comes in several varieties. Its main advantage is efficient heat dissipation. A square eight, used in rescue applications, is better for rappelling than the traditional 8. Because of the "ears" or "wings" on the rescue 8, there is less chance of forming a girth hitch while rappelling very quickly. 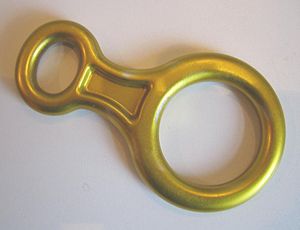 Figure eights allow fast but controlled descent on a rope. They are easy to set up and are effective in dissipating the heat caused by friction but have a tendency to put a twist in the rope. This twisting only occurs during improper use of the 8. Holding the brake hand off to the side twists the rope, whereas holding the brake hand straight down, parallel to the body, allows a controlled descent without twisting the rope. Because of the many bends it puts into the rope, an 8 descender can wear a rope quicker than a tube style belay/rappel device. Many sport climbers also avoid them because of the extra bulk an 8 puts on the rack. However, many ice climbers prefer to use the 8, because it is much easier to thread with stiff or frozen rope.

A rescue eight is a variation of a figure eight, with "ears" or "wings" which prevent the rope from "locking up" or creating a girth hitch, thus stranding the rappeller on the rope. Rescue eights are frequently made of steel, rather than aluminum.

Discord? What about it!
This page was last edited on 5 October 2021, at 20:59.
This is an official site of the North American Division Youth & Young Adult Ministries of the Seventh-day Adventist Church.
9705 Patuxent Woods Dr
Columbia, MD 21046