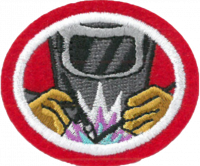 Identify all parts of the following:

A welding torch has a nozzle with one hole. The torch body mixes oxygen and acetylene, and you get your flame.

A cutting torch has several nozzles arranged in a circle, which emit an oxygen/acetylene mix (like the welding torch). In the center of this circle of nozzles is a larger hole where only oxygen is emitted. The outer holes heat the steel, and the inner hole cuts.

Oxygen and acetylene gauges and their differences

Oxygen and acetylene hoses and their differences

The oxy acetylene welding hoses are made out of a durable rubber that is designed to withstand different pressures. There are several things to remember about the hoses:

Oxygen and acetylene tanks and their differences

The oxygen and acetylene cylinders are designed to hold high-pressure gases. There are some important things to remember when using these cylinders:

Explain the safe working pressures of oxygen and acetylene, as per your instruc­tor's directions, for various procedures.

When cutting with an oxy-acetylene torch, acetylene should again be set at about 5psi. Oxygen, however is set much higher, about 25psi, when cutting.

These steps must be followed to ensure safe usage of this equipment.

After the equipment has been used these steps must be followed to ensure safe storage:

Setting up the torch:

There will be no horseplay.

While blindfolded, demonstrate ability to hook up an entire oxyacetylene kit, including tanks, gauges, hoses, and torches, and light the same.**

Explain the safety precautions and safety equipment normally used in electric welding in relation to eyes, hands, and exposed skin areas. Why should the tank valves never be oiled?

The correct safety equipment must be used when using the oxy acetylene equipment or electric welding.

Explain the difference between oxyacetylene and electric arc welding.

Oxy-acetylene welding uses two gases in the process of producing a weld. Acetylene, which is the fuel and is the main source of heat, and oxygen, which is a propellant.

Electric arc welding does not use gas to produce a weld like oxy-acetylene welding does. Electric arc welding uses an electric current to produce its welds. A clamp, with the one side of the current flowing through it, is attached to a base plate. Then the another clamp/nozzle, with the other side of the current flowing through it, is held in a hand. A filler rod is then used to complete the circuit and create the heat needed to heat the pieces of metal being joined and melt the filler rod (used to bind the pieces of metal together).

Demonstrate ability to select from an electrode guide the proper amperage and electrode for various types and thicknesses of metal.

An instructor is a must. Welding is a very critical and serious skill to learn and is not a home-type course. Welding essentially takes the place of bolts and rivets, and if not properly done, is most dangerous. Example: A trailer hitch not properly bond­ed, or machinery exposed to the strain of pull or weight, is an invitation to disaster.

Discord? What about it!
This page was last edited on 4 October 2021, at 16:09.
This is an official site of the North American Division Youth & Young Adult Ministries of the Seventh-day Adventist Church.
9705 Patuxent Woods Dr
Columbia, MD 21046