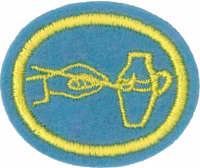 It is believed that the earliest pottery wares were hand-built and fired in bonfires. Firing times were short but the peak-temperatures achieved in the fire could be high, perhaps in the region of 900 degrees Celsius, and were reached very quickly. Early bonfire-fired wares were made with rounded bottoms, to avoid sharp angles that might be susceptible to cracking. The earliest intentionally constructed kilns were pit-kilns or trench-kilns; holes dug in the ground and covered with fuel. Holes in the ground provided insulation and resulted in better control over firing.

The earliest pottery ware found to date was excavated from a cave in southern China.

The invention of the potter's wheel in Mesopotamia revolutionized pottery production. Potters were able to work quickly and produce pottery to meet the expanding needs of the world's first cities.

Ceramics began in China 6,000 years ago during the New Stone Age whose advent was marked by the invention pottery. The earliest earthenware was moulded by hand and the potter's wheel was something that came much later. In the beginning, clay was fired at a temperature of about 500-600 degrees celsius. Painted pottery began to be known during the period of Yangshao and Longshan Cultures.

The large legion of terra-cotta soldiers and horses of the Qin Dynasty (221 - 207 B.C.) which were discovered in the province of Shaanxi in 1974, are eloquent proof of the high skills in kiln-firing and sculpture attained at that early age. The art of pottery reached another peak of development in the Tang Dynasty (618 - 907 A.D.), as evidenced by the renowned "tri-coloured glaze."

Wucheng Village of Qingjiang County, Jiangxi Province vessles of blue-glazed ware have been unearthed. Upon examination, they proved to have been made of kaolin and fired at high temperatures of 1,200C. Their surface is coated with a glaze, whose chemical composition is very close to that of their bodies. Certain procelains of the Song (960 - 1279) and Ming (1368 - 1644) dynasties were already celadon, though at its early stages.

Chinese ceramics became known to the world at large from the Tang Dynasty so much so that the word "china" became the name of procelain. Chinese procelain, together with Chinese tea and silk flowed through the Silk Road and other land and sea routes to foreign countries.

The quality of pottery has varied historically, depending on the reputation the potter made for himself in his community.

Explain the use of cones in kilns.

Cones are a necessary, vital tool in ceramics, signalling the user that the correct firing time and temperature have been reached.

There are two types of cones:

Know how and when to use underglaze and glaze.

Underglaze can be used on greenware or bisque and is applied with a brush or sponge.

Glaze is used after you have decorated your bisque. Can be applied using a brush or dipping decorated bisque in a container of glaze. This glaze gives your bisque a glass finish once fired in a kiln.

Stain is used for decorating bisque. It can be applied using a brush or sponges. The stain goes on the bisque before the glaze.

Know what tools are used in completing your projects in ceramics.

There are endless tools used in completing a ceramic project, including:

Properly called Crystalline, this is a special effects glaze made primarily of particles of zinc oxide and silica mixed with water. It is applied to the ceramic piece in a thick paste. Crystalline glaze is extremely runny at peak temperatures, a clay pedestal and glaze catch dish used for each item to prevent the glaze from running onto the kiln shelves. While at peak temperature (around 2350 degrees F), a chemical reaction between the zinc oxide and the silica forms seed crystals from which the crystal will eventually mature. After the chemical reaction is stimulated, the kiln is cooled 200 degrees below the peak temperature. The temperature is then held for 5 hours to allow the crystals to grow to the desired size. This is called the soak cycle. Once this cycle is completed, the kiln is turned off, and the crystal growth period is complete.

The base crystalline glaze is white in color and metallic pigments such as manganese dioxide, iron oxide, nickel oxide, cobalt carbonate, or copper carbonate are added creating the spectrum of colors. After the kiln has cooled to room temperature, the vases and attached catch dishes are removed from the kiln. The clay pedestal are tapped off with a hammer and any excess glaze is ground off the bottom. Source and photos.

Complete two of the following using underglaze on at least one item:

Item of your choice

Go find a ceramic studio and get creating. Most importantly, have fun!

Note: Candidate need not do the firing.

Discord? What about it!
This page was last edited on 4 October 2021, at 16:13.
This is an official site of the North American Division Youth & Young Adult Ministries of the Seventh-day Adventist Church.
9705 Patuxent Woods Dr
Columbia, MD 21046