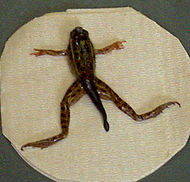 a. Observe a toad in your yard or neighborhood to find out.
(1) Where and when it sleeps,
(2) When it leaves its home for food,
(3) How fast it can travel,
(4) How far it can jump, and as many other interesting things as you can find out about it, and write an essay covering the details requested in the first section of this question.

b. Hatch some amphibian eggs and watch them through their growth cycle and write an essay covering the details.