This Wiki has a page with instructions and tips for earning the Cacti honor.

3. Identify from plants or photos five succulents that are not cacti. How are they different from cacti? 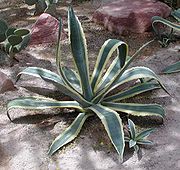 Agave is the name of a succulent plant of a large botanical genus of the same name, belonging to the family Agavaceae. Chiefly Mexican, they occur also in the southern and western United States and in central and tropical South America. The plants have a large rosette of thick fleshy leaves generally ending in a sharp point and with a spiny margin; the stout stem is usually short, the leaves apparently springing from the root. Along with plants from the related genus Yucca, various Agave species are popular ornamental plants. Each rosette is monocarpic and grows slowly to flower only once. During flowering a tall stem or "mast" grows from the center of the leaf rosette and bears a large number of shortly tubular flowers. After development of fruit the original plant dies, but suckers are frequently produced from the base of the stem which become new plants. 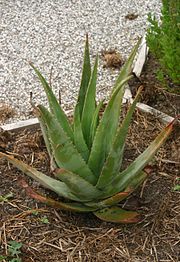 Aloe, also written Aloë, is a genus containing about four hundred species of flowering succulent plants, the most well known of which is Aloe vera.

The genus is native to Africa and is common in South Africa's Cape Province and the mountains of tropical Africa, and neighbouring areas such as Madagascar, the Arabian peninsula and the islands off Africa.

Sedum is the large stonecrop genus of the Crassulaceae, representing about 400 species of leaf succulents, found throughout the northern hemisphere, varying from annual groundcovers to shrubs. The plants have water-storing leaves and a typical form of blossom with five petals, seldom four or six. There are typically twice as many stamens as petals.

Many sedums are extensively cultivated as garden plants, due to their interesting and attractive appearance and hardiness. The various species differ in their requirements; some are cold-hardy but do not tolerate heat, some require heat but do not tolerate cold. They are preferred to grass for green roofs, popular in Germany and some other countries.

The common name Ice Plant refers to Carpobrotus edulis, a creeping, mat-forming succulent species, and member of the Stone Plant family Aizoaceae, one of about 30 species in the genus Carpobrotus. It is also known as the Highway Ice Plant, Pigface or Hottentot Fig and in South Africa as the Sour Fig, on account of its edible fruit. It was previously classified in genus Mesembryanthemum and is sometimes referred to by this name.

The Ice Plant is a native of South Africa. In the early 1900s C. edulis was brought to California from South Africa to stabilize soil along railroad tracks and was later put to use by Caltrans for similar purposes. Thousands of acres were planted in California until the 1970s. It easily spreads by seed (hundreds per fruit) and from segmentation (any shoot segment can produce roots). Its succulent foliage, bright magenta or yellow flowers, and resistance to some harsh coastal climatic conditions (salt) have also made it a favoured garden plant. The Ice Plant was for several decades widely promoted as an ornamental plant, and it is still available at some nurseries. Ice Plant foliage can turn a vibrant red to yellow in color. 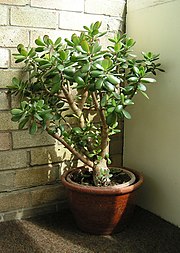 Commonly known as jade plant or friendship tree, Crassula ovata is a succulent plant that sometimes has small pink or white flowers. Jade Plants are evergreen succulents native to South Africa where the environmental conditions are dry with little rainfall.

The plant itself can be identified with thick branches and smooth, rounded and fleshy leaves that grow in opposing pairs along the branches. The species has a jade green color to the leaves, and some species can also develop a red tinge on the edges of leaves when exposed to high levels of sunlight. The growth pattern and structure of the succulent is evenly distributed. Dependent on the environment in which it is in, the plant produces small white or pink star like flowers that adorn the ends of new stalks in the Spring.

Jade plants are popularly used as houseplants around the world. They are propagated by stem or leaf cuttings. As succulents, they require a normal watering when the soil is dry in the summer, and very little watering in the winter. Overwatering will cause them to lose their leaves and eventually the stem will rot away. They will grow in full sun to light shade. However, they do not tolerate extreme heat or overexposure to direct sun very well, showing damage ranging from scorched leaves to loss of foliage and rotting stems. Most of the common species will tolerate a limited degree of frost but overexposure to cold weather will kill them.

How are they different from cacti

None of the plants listed above have spines as cacti do.

4. Know the definitions of the following terms within a cacti/succulents frame of reference.

Areoles are the distinctive feature of cacti, and identify them as a separate family from other succulent plants.

Cephalium is a frequently brightly colored, structure of wool and bristle at the growing tip of certain cacti. It is most commonly found on cacti of the genus Melocactus and can take a number of colors, forms and shapes.

Coalesce is when two objects grow together.

A corymb is similar to a panicle with the same branching structure, but with the lower flowers having longer stems, thus giving a flattish top superficially resembling an umbel.

A plant or animal that is active in the daytime

An epiphyte is an organism that grows upon or attached to a living plant.

Glochids are tiny, almost invisible barbed hairs found on the areoles of some cacti and other plants.

Primarily active during the night.

Offshoots are lateral shoots that are produced on the main stem of a plant.

A panicle is a compound raceme, a loose, much-branched indeterminate inflorescence with pedicellate flowers (and fruit) attached along the secondary branches (in other words, a branched cluster of flowers in which the branches are racemes).

Scale are small insects of the order Hemiptera, most of which are parasites of plants, feeding on sap drawn directly from the plant's vascular system.

A stolon, commonly referred to as a runner, is an aerial shoot from a plant with the ability to produce adventitious roots and new clones of the same plant.

5. When raising succulents — including cacti — they may be attacked by maladies. What are the most common and how can you prevent or cure the problems?

The most common cactus malady is mold, usually caused by overwatering. If mold is detected on a cactus, the affected part should be cut off as soon as possible, using a sharp knife. Then the wound should be sprinkled with sulphur or a fungicide. If the roots are affected, the core of the cacti is probably also affected and the plant will almost certainly die.

6. Propagate at least one plant by using one of the following methods: from seed, by cuttings, or grafting.

The link under 'References' has good material for this activity that you need to do. Enjoy!