Knot tying is an important part of Pathfindering with tie ins to Investiture Achievement and many other honors such as the various Camping Honors, Rock Climbing, Pioneering and others.

An effective way to teach knots in a club setting is to have the staff and the older Pathfinders (the ones who already have the Knot Tying Honor) each teach a single knot at a knot tying station. The Pathfinders who are learning the knots will rotate through the stations. After a set time, ring a bell to signal that it's time to rotate, and do not allow the students to rotate until the bell rings (otherwise, they will all gravitate to the same table).

Using this approach, each of the teachers need only learn a single knot well enough to teach it, and the students will have a chance to receive one-on-one instruction for every knot. Allow at least seven or eight minutes per station. You can do this over more than one meeting if necessary, and you can involve the entire club at once rather than only a single unit.

Prior to the meeting, the rope may be cut to the proper length. Some instructors consider cutting rope during a meeting a waste of valuable teaching time, while others use it as an opportunity to teach proper binding of the rope. To prevent the cut rope from unravelling, wrap a small piece of duct tape around it before you make the cut - then cut the tape in half. This will save time, as it binds both ends of the cut in one shot.

The length of each rope should be suited to the knot it will be used for. Note that a figure eight knot does not require as much rope as a timber hitch, and that it is impossible to tie a knot on a rope that it too short to hold it. Conversely, using too much rope for small knots is a waste of good rope (and money!). Remember that the amount of rope wasted on each knot will be multiplied by the number of students.

A good way to determine proper rope length is to tie the desired knot using a long piece of rope, cut it, and then untie it. That's how long it needs to be. Cut as many of that length as you will have students, put them in a plastic baggie, and label the bag. You may have the knot instructors cut their own ropes, or you may have a squad of TLT's do this. Or you could do it yourself (but that would be depriving your TLT's and/or instructors of a valuable experience).

Two knot tying stations can easily share an eight foot table and a hot-melt glue gun - assuming the students will be mounting the knots on a board as they tie them. If you are organized and have the space, you can store their knot boards from year to year and let them add to it each year. By the time they are in the Ranger class, they will appreciate not having to tie 25 knots all at once.

A good knot board can be made from a length of lumber - 24"x12"x3/4" makes a good sized board if you are using quarter-inch diameter rope. A stick can be fastened along the edge of the board to make a convenient place to tie the hitches.

For a professional-looking knot board, prepare labels for the knots using a label maker. Again, this is something that should be done prior to the meeting, as making labels and distributing them is not an effective use of instruction time. You should also make labels with each student's name (or have students label their boards neatly) so that they will be able to find their knot boards in the future and to prevent disputes over knot board ownership. You might also consider labeling the knot boards before they are given to the students (and before the knots are tied), as this makes it easy to figure out which knots the student still needs to learn.

It's a good idea to begin this honor with the definitions so your Pathfinders have a working vocabulary of the various terms involved. Telling them to "make a bight" or "take the standing part" makes little sense until these terms are understood. 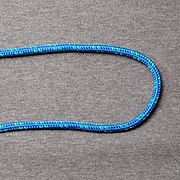 The term bight refers to any curved section, slack part, or loop between the two ends of a rope,

The part of the rope between the Running end and the Standing end (the end that doesn't move, think of it as if you are standing on that end.)

A loop formed by passing the running end of a line under the standing part.

A loop formed by passing the running end of a line over the standing part. 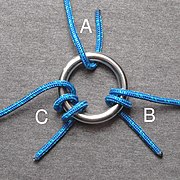 A bend is used to tie two ropes together, as in the Sheetbend. Technically, even the Reef knot is a bend.

A hitch is used to tie a rope to a spar, ring or post, such as the Clove hitch. Hitches can also be used to tie one rope ONTO another rope, as in the Rolling hitch.

A knot formed by interweaving strands of rope rather than whole lines. More time consuming but usually stronger than simple knots.

A binding knot used to prevent another line from fraying.

3. Describe the difference between laid rope and braided rope and list three uses of each.

In laid rope, three bundles of fiber or twine are twisted in the same direction, placed close to each other, and allowed to twist together. In braided rope, the fibers are woven together, often around some core material.

4. Identify the following types of rope:

Manila is a type of fiber obtained from the leaves of the abacá (Musa textilis), a relative of the banana. It is mostly used to make ropes and it is one of the most durable of the natural fibers, besides true hemp. Manila is a coarse, brown fiber, about the same color and feel as a coconut shell.

Sisal is valued for cordage use because of its strength, durability, ability to stretch, affinity for certain dyestuffs, and resistance to deterioration in saltwater. Sisal ropes and twines are widely employed for marine, agricultural (bailing twine), and general industrial use. Sisal fibers are smooth, straight and yellow and can be long or short.

Nylon rope is often white, but any color is possible. It has a smooth, silky feeling to it, and it coils easily. Nylon rope does not float in water. It is a synthetic-fiber rope.

Polypropylene rope is most often yellow, though any color is possible. It is often used in marine applications because it floats in water. The rope is sometimes difficult to tie as it is somewhat stiff and brittle. It is a synthetic-fiber rope.

The easiest way to make an initial identification of a rope is to visit a hardware store where rope is sold. The packaging will tell you what the rope is made of. If you want to be sure, buy some of each type (with the labeling) or examine it closely in the store.

5. What are some advantages and disadvantages of synthetic rope?

6. Do the following to rope:

A splice (short splice or long splice) is used to join the ends of two ropes and results in the spliced part being about twice as thick as the non spliced part. The short splice retains more of the rope strength than any knots that join rope ends. It is tied using the same techniques as the eye splice (see below).

d. Finish the end of a rope with a double crown, whipping, or a Matthew Walker's knot.

7. Make a six-foot piece of three-strand twisted rope from native materials or twine.

Making rope requires some simple apparatus which you can make yourself easily enough. The first apparatus (we'll call it the twister) is used for twisting three strands of twine (or smaller rope). When making the twister, clamp the two boards that form the handles together tightly and drill three holes through both at the same time. This will ensure that they line up. The hook/crank portion of the twister can be made from coat hanger wire. First make the two 90° bends in the center, then pass them through the holes in the handles. Finally, form the hooks on one end and the other 90° bend on the other. (This final bend prevents the crank from slipping out of the holes in the handle).

As the strands are twisted, they will tend to grab one another and twist together. To make rope, this tendency has to be controlled. This is done with a second apparatus (we'll call it the separator). It consists of a board with three holes drilled in it, forming the points of an equilateral triangle. These points should be at least six inches away from one another, and should be large enough to pass the strands of twine through.

To make rope, cut three pieces of twine about 33% longer than the desired rope. Pass each strand through a hole in the separator, then tie a non-slip loop in the end of each (a figure-eight on a bight works well for this). We will call this end of the strands the free end. Slip these loops over a hook of some sort, and pull the strands straight. Bunch the ends opposite the loops together, and tie them off, again in a loop (and again, a figure-eight on a bight works well for this). We will call this end the bound end. Make sure that the three strands are the same length from one loop to the other. Hand the bound end to a helper, then attach the loops on the free end to the hooks on the twister. Pull the twister away from the bound end (still affixed firmly to another hook) until the strands are straight and tight. Then slide the separator towards the common end. Start cranking the twister so that the hooks rotate. As you crank, your helper will allow the three strands on his side of the separator to twist together. As they do this, the helper will slide the separator towards you, going only as fast as the strands bind to one another. Be careful to keep the strands tight as you do this so that they do not bind to one another on your end of the separator. Continue twisting until the separator reaches the twister. Then tie a knot in the free end of the rope, unhook it from the twister, and slide the separator off. Tie a stopper knot, or bind the end with tape. Then cut off the few inches of untwisted strand that remain (or make a back splice). Finish the opposite end in the same manner. Voila! You now have a rope!

Guide to making rope from natural materials and no tools. Another technique.

8. From memory tie at least 20 of the following knots and know their common uses and limitations. Demonstrate how they are used.

c. Bowline on a bight