1. Define lashing and explain its purposes.

A lashing is an arrangement of rope wire or webbing with linking device used to secure and fasten two or more items together in a somewhat rigid manner. Lashings are most commonly applied to timber poles, and are commonly associated with cargo, containerisation, the Scouting movement, and sailing.

2. How can lashing be used in a camping or outdoors setting? Give three examples.

Lashing can be used to build useful items in a camp setting. If in an area where gathering timber is allowed, the camper with proper skills can build the needed items rather than pack them in.

Three categories of items that lend themselves to lash construction include:

3. What materials are used in lashing?

a. List types of ropes that are preferred for lashing.

b. Give the advantages of natural materials over dimensional lumber.

The imperfections inherent in natural materials allows for greater amounts of friction to develop between the work pieces (spars and ropes). In contrast dimensional lumber pieces will require higher amounts of tension in wraps to achieve similar holding power.

5. What beginning and ending knots are used in the following five types of lashing:

Start with a timber hitch (can substitute clove hitch for smaller work pieces) and end with two half hitches backed by a clove hitch.

6. Explain how to calculate the length and thickness of ropes needed for a project. Demonstrate how to preserve the ends of a cut rope.

7. Explain the differences between a frap and a wrap.

8. Demonstrate how to tie the following five lashings:

Strength is improved if care is taken to lay the rope wraps and fraps in parallel with a minimum of crossing.

A properly executed lashing is very strong and will last as long as the twine or rope maintains its integrity. A lashing stick can be used to safely tighten the joint. 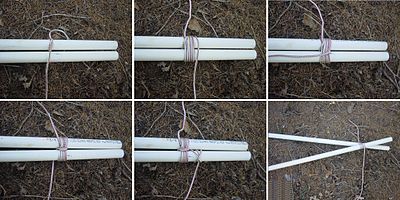 To use sheaer lashing around with three poles, lay all three poles side by side and parallel to one another. Tie a clove hitch on one pole, and wrap the rope around all three seven or eight times. Pull the rope tight. Make three fraps between two of the poles, then cross over and make three more between the other two poles. Pull the frapping as tight as you can and finish it off with a clove hitch.

Diagonal lashing is a type of lashing used to bind spars or poles together, to prevent racking. It is usually applied to cross-bracing where the poles do not initially touch, but may by used on any poles that cross each other at a 45° to 90° angle. Large, semipermanent structures may be built with a combination of square lashing, which is stronger, and diagonal lashing.

Bailing twine has sufficient strength for some lashing applications but rope should be used for joining larger poles and where supporting people sized weights.

A lashing stick can be used to safely tighten the joint. Strength will be improved if the first turn is 90° to the timber hitch and if care is taken to lay the rope turns parallel with no crossings. 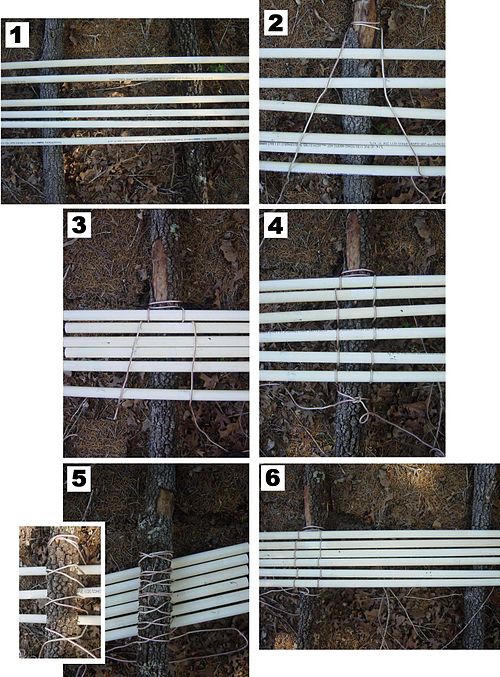 Continuous Lashing is a fun technique. It is used to create shelves, tables, and other structures.

Comments on the pictures on the right'

9. Discuss what types of weight loading each diameter of rope can handle depending on the nature of the material.

They have good stretch and moderate heat resistance. Nylon 6 is used in rock climbing and nylon 66 is used in abseiling. Nylon is resistant to abrasions, bacteria and most organic solvents. It is sensitive to strong acids, alkalinity and long exposure to sunlight.

10. Demonstrate ways to store ropes and wood for later use.

Rope should be Coiled up and hung up in a dry place, or put in a box or bucket. The box or bucket should have holes to let the rope breathe. This will help against rot and odors.

The wood should be bundled up and racked off the ground in a dry place, like on a wall or hung from the ceiling. If outside, the wood should be wrapped in a tarp or oiled canvas to keep out water.

11. Create at least three of the following items:

a. Chair (must include seat and back)

d. Flag pole (must have at least four spars)

e. Ladder (must include six rungs)