1. List and describe the principle characteristics, qualities, and sizing of the following cross-country skiing equipment:

The skis are long and thin, to distribute the weight of the skier and allow the skier to move quickly. Typical ski dimensions are 2 metres in length, about 5 centimetres in width and one to four centimetres in thickness at different stations along the length of the ski. Depending on the ski design and purpose, they are fit to the skier based on height and weight. Cross country skis are sometimes informally known as "skinny skis" because of their thinness compared to alpine skis.

In recent years, waxless skis have carved a niche in the market among casual skiers. Waxless skis have a fish scale, cross-hatched or ridged pattern in the kick zone to provide grip. A waxless ski is inferior to a finely tuned waxed ski, but does not require the sometimes time-consuming and sometimes costly selection and application of kick wax or klister and will work between temperatures, an important advantage in areas with many sun/shadow boundaries. Some skiers apply a layer of glide wax to keep them sliding smoothly and protecting the surface from dirt and ice build-up. There are specialty liquid wax products on the market manufactured for waxless skis, though standard glide wax can also be used on the tips and tails of the ski.

Waxless skis are better suited to recreational skiers who simply want to get out on the trail with minimal time spent on maintenance, as they generally produce too much drag for competitive skiers.

Waxless skis are sometimes used by Nordic racers during variable ski conditions such as temperatures over freezing. In fact, some Nordic ski racers using waxless skis have beaten racers who used waxable skis due to the variable and changing conditions.

There are three primary groups of binding systems used in modern cross-country skiing:

Older styled three-pin bindings (Nordic Norm), with or without cables, are still used by backcountry and Telemarking enthusiasts.

Further variants to NNN and SNS are "BC" (back-country) standards, where the toe hold in the binding is wider and the bar in the boot's toe is longer and thicker in order to give further lateral rigidity. This added strength and rigidity is especially important with the stiffer boots and heavier skis used in backcountry skiing.

The existing variety of binding systems, none of which are compatible with the other, has long since been a source of frustration for skiers ever since manufacturers diverged from the almost universal three-pin standard. Whereas downhill skiing has a common binding system allowing any boot to work with any binding short of the dynafit-system, modern cross-country skiers must match the skis' binding system to the boot type. When it is time to change the boot, the skier must either be limited to boots of the same binding system or also change the skis' binding.

Rottefella developed the New Nordic Norm (NNN) binding, and licenses it to Rossignol, Madshus, Atomic, and, beginning in 2007, Fischer. These bindings have subtypes, such as the NNN-BC for backcountry use, the R3 Skate, the R3 Classic, and the R4 NIS (Nordic Integrated System). The NIS system requires skis that have a permanently bonded plate that the binding slides onto. This allows for the skier to mount their own bindings without needing to screw into the ski. By doing this the skier can easily tune the position of the binding relative to the center of gravity of the ski, said to be useful in different snow conditions. NNN boots are made by Alpina Sports, Madshus, Rossignol and beginning in 2007, Fischer. The R3 and R4 are generally the choice for World Cup Racers using NNN. These are distinguished from the SNS (Salomon and Atomic) binding in that all NNN bindings have two longitudinal ridges that stick out from the bottom of the binding that mate with corresponding slots in NNN boots. There is much debate over which is the superior binding system: SNS or NNN. Overall, the differences between the NNN and SNS binding systems are minuscule to the average skier; the choice should come down to which binding fits with the boot that happens to fit a given skier.

The R4 NIS binding, made by Rottefella and Rossignol, is the newest variant of the NNN binding. These bindings are compatible with any NNN boot, but can only be used on skis that come with the permanently bonded plate, presently made only by Rossignol, Madshus, and Fischer. The NIS binding made its debut to the general public in 2005. 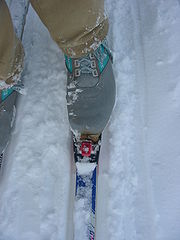 SNS binding and ski boots, both of the Salomon brand.

Salomon Nordic System (SNS) bindings, made by Salomon and Atomic, however, have their advantages too. Boots that are compatible with the SNS Profil system are made by Salomon, Atomic, Adidas, and Hartjes. SNS Profil bindings are used for both Skating and Classic. As opposed to the SNS Pilot's two axes, these boots have only one axis at the front of the sole. Pilots are used by many different racers on the World Cup Circuit. Profil bindings are the standard binding for SNS users, its only competition being the SNS Pilot system. Profil comes in "Equipe" models for racing, "Active" for recreational racing/combination, Auto Touring, and Back Country. Fischer was for many years synonymous with SNS as well, but switched to the more widely used NNN for the 2007/2008 season and beyond.

SNS Pilot bindings, compatible with Salomon, Atomic, Adidas and Hartjes boots. As of the 2006/2007 season, Atomic will also have SNS pilot on their boots. The idea for these bindings came from Bjørn Dæhlie. Pilots are used mostly by elite skiers at the Collegiate/Olympians/World Cup/National level, although it is common to find High School/Citizen Racers with these bindings and their counterpart boots. Pilots are more expensive than Profils at about 100 U.S. dollars for a pair, and have two completely different designs for skate skiing and classical skiing. In Pilot boots, two axes (metal bars), one positioned about 1" (2.5 cm) behind the other, click into two different slots in the Pilot binding. Profil boots only have one axis and therefore cannot fit into Pilot bindings. However, Pilot boots can fit into most Profil bindings, due to a small space behind the front of the boot for the other axis. Pilot Skate bindings are superior to Profil due to the two latches reducing ski motion in the air. The Pilot Classic (released at the end of the 2005-2006 season) doesn't have the bumper found on all NNN and SNS Profil bindings. These new boots and bindings provide a superior subtle kick through a spring loaded back slot for the back axis. Unlike the rubber bumpers, this spring has adjustable tension that can be changed in different snow conditions. Fischer has now started producing their new boots with the NNN system.

Shoes (boots) are covered in the Bindings section above.

Like alpine skiing, cross-country skiers carry two poles, usually made of aluminium or fiberglass. More expensive poles are made of graphite or carbon fiber or some other strong but lightweight material. Poles have a spike at the end to provide a fixed pivot when the pole penetrates through to a hard surface, and a plastic web or disc (called the basket), to provide extra purchase in snow and to ensure the pole doesn't sink too deeply.

2. Describe and demonstrate how the above gear would be prepared for use and cared for both on the field and during the off season.

a. Flat striding with good kick, purchase, and form

c. Side stepping up and down slopes

i. Snow plowing for slowing speed and stopping

7. Know and explain the official National Ski rules for conduct in cross-country skiing.

1) Plan ahead and prepare. 2) Travel and camp on durable surfaces. 3) Dispose of waste properly. 4) Leave what you find. 5) Minimize campfire impacts (be careful with fire). 6) Respect wildlife. 7) Be considerate of other visitors. © 1999 by the Leave No Trace Center for Outdoor Ethics: www.LNT.org.

a. Take three separate three-mile trail tours with another individual. If possible, have varying snow conditions.

It is always important to ski with a buddy for safety reasons. It is also more fun.

b. Take a ten-mile tour over varying terrain.