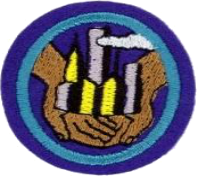 Specific only to places where ADRA serves (not available in the United States), this patch originally had the image of hands cradling something (which is evident in some other logos of different Adventist Ministries), in this case a city. This honor was later combined with Rural Development to create Community Development. These ADRA patches originally appeared in 2002, but were later redesigned and some requirements modified in 2009.

Discord? What about it!
This page was last edited on 11 March 2021, at 04:24.
This is an official site of the North American Division Youth & Young Adult Ministries of the Seventh-day Adventist Church.
9705 Patuxent Woods Dr
Columbia, MD 21046