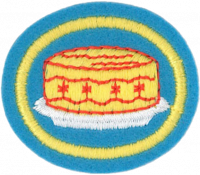 Decorating bags
Small triangular shaped bags made from cloth, plastic or parchment paper which are fitted with decorating tips and filled with icing and used to pipe decorative items such as icing flowers, borders, scrollwork and lacework designs.
Decorating tips and collars
Sometimes called nozzles. These tips are used to create decorative items such as icing roses, shell borders, basketweave patterns and more. These come in various shapes and are used with an icing or pastry bag so that when the bag is squeezed the icing or cream is piped out in the shape of the tip, which may or may not be the final shape desired. For example, drop flowers are created with a single squeeze, while rose petals are created with skilled maneuvering. The collars are optional equipment that allow the tip to be changed without removing frosting from the bag.
Frosting spatula
Similar to a butter knife, but with smooth edges on the unsharpened blade. This is used to apply a smooth layer of frosting to a cake.
Flower nail
Shaped like a nail with an oversized head, this is used for piping royal icing and buttercream flowers onto before transferring to the cake.
Cake platter
A platter on which the cake sits as it is decorated and served. It can be as simple as a piece of corrugated cardboard covered with aluminum foil.

Learn from memory the two cake icings-butter cream and royal-and their proper uses. Name one other icing used for frosting.

Buttercream Icing recipe is perfect for spreading or decorating.

This smooth, hard-drying icing is perfect for making decorations that last. It is also useful as a "cement" to fasten decorations together. Royal icing is edible, but not recommended for icing cakes.

Learn and demonstrate proper construction of the decorating tube using parchment, wax papers, or a disposable bag. Show proper method of inserting tip, brushing with color, filling with icing, and folding of top. What is the name of the top fold?

This video shows how to brush with color.

When using parchment or wax paper, the top of the "bag" is folded with what is called a "diaper fold":

Icing Consistency
If the consistency of your decorating icing is not just right, your decorations won't be right either. Just a few drops of liquid will make a great deal of difference in your results.
Correct Bag Position
The way your decorations curl, point, and lie depends not only on the icing consistency but also on the way you hold the bag and the way you move it. Bag positions are described in terms of both angle and direction.

Angle
Angle refers to the position of the bag relative to the work surface. There are two basic angle positions.
90° angle, or straight up, perpendicular to the surface. Used when making stars or flat petal flowers.
45° angle, or half way between vertical and horizontal. Used for writing and borders.
Direction
The angle of the bag to the work surface is only half the story of the bag position. The other half is the direction in which the back of the bag is pointed. Correct bag direction is easiest to learn when you think of the back of the bag as the hour hand of a clock. When you hold the bag with the tip in the center of the clock, you can sweep out a circle with the back end of the bag. Pretend the circle you formed in the air is the clock face. The hours on the clock face correspond to the direction you point the back end of the bag.

Pressure Control
The size and uniformity of your icing designs are affected by the amount of pressure you apply to the bag and the steadiness of the pressure : how you squeeze and relax your grip on the decorating bag. Your goal is to learn to apply pressure so consistently that you can move the bag in a free and easy glide while just the right amount of icing flows through the tip. Practice will help you achieve this control.

Demonstrate pressure control with tubes. Learn the technique and name the proper tip (tube) used to make the following:

Use the star tube. Hold the bag in an upright position, and lightly touch the tip of the tube on the cake. Apply pressure to the bag until the dab of icing is the required size. Cease the pressure, and lift the tube quickly from the cake.

Use a round tip or a star tip. Hold the bag at a 90 degree angle at the top perimeter of an iced cake. Gently squeeze the bag, directing the flow of icing to create a horizontal "S" shape near the edge of the cake's surface. Stop squeezing, and lift straight up to stop the flow of icing. Create another "S" shape next to the previous one, creating scrolls all the way around the perimeter of the cake. Let the icing harden for 15 minutes before moving the cake.

Learn to make the following flowers:

NOTE: There are other tips that can be used for making drop flowers, but the technique is the same: 90 degree position, squeeze, twist, and release.

Decorate a doll cake or a cake prepared in a specialty cake pan using star fill-in method. Use at least two colors to make the design or pattern.

Make a special occasion cake of your choice using two or more borders of different types, and a floral arrangement.

Almost anything can be a special occasion. Have fun. INSERT HOW TO DO THESE.

A good valentines project, or try an "I love my Pathfinder Director" cake. Or maybe an "I love the Lord!" which would be better.

Discord? What about it!
This page was last edited on 20 September 2021, at 02:00.
This is an official site of the North American Division Youth & Young Adult Ministries of the Seventh-day Adventist Church.
9705 Patuxent Woods Dr
Columbia, MD 21046