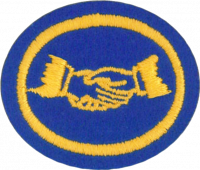 To develop an awareness and appreciation for the cultural diversity within our church and society.

Culture
The arts, customs, and habits that characterize a particular society or nation. The beliefs, values, behavior and material objects that constitute a people's way of life.
Cultural diversity
Cultural diversity is the variety of human societies or cultures in a specific region, or in the world as a whole.

Define stereotype and identify how you may have stereotyped people in the past.

Stereotype
A conventional, formulaic, and oversimplified conception, opinion, or image. A person who is regarded as embodying or conforming to a set image or type.

Stereotyping means that we make a judgment about a person based on what we think we know about that "type" of person (i.e., because of the person's race, sex, religion, etc.). Sometimes this judgment is subconscious, and we are not even aware that we have made a judgment at all. An example would be a sudden feeling of fear upon seeing a person of a different race in a lonely place, or the automatic assumption that because a person is female, she must like to bake or sew, or she cannot repair an automobile.

Study the following Bible texts and answer the questions.

1 Corinthians 9:20 How does this text explain the importance for a Christian to have a cultural diversity awareness?

In order to reach people of a different culture, it is important to understand that culture. For them to feel accepted by you, you should consider adopting some of their practices, as Paul did. This shows that you have an open mind and are genuinely interested in them. It will also serve to encourage them to build trust in you.

An extreme example is Adventist Frontier Missions where missionary teams move into cultures where there are no Adventists (and often no Christians). The missionaries learn the language and study the culture as their first steps. So long as a cultural practice does not conflict with their faith, they adopt the new culture completely. In a Muslim country, this may include wearing the hajib and praying to God in a mosque.

For cultural practices that can not be reconciled with the Adventist faith, an alternative is developed. Instead of a ceremony involving witchcraft when moving into a new house, they might have a home blessing ceremony that invites God into the home. Rather than try to change a whole culture, they contextualize the Christian faith into the worldview of the existing culture. Christianity can and should fit within every culture, changing hearts, not trying to turn everyone into typical Westerners.

Galatians 3:27 What does this text say about all who are in the family of Christ?

For all of you who were baptized into Christ have clothed yourselves with Christ.
— Galatians 3:27 (NIV)

This passage indicates that all believers are equal in the eyes of Christ. Being "clothed in Christ" means that the Christian's sins are covered. Instead of God seeing your sins when He looks at you, He will see His Son instead. This means that no matter how heinous your sins were, God will still accept you if you accept Christ. This also applies to Christians of other cultures. No matter what terrible things the others have done, they will be forgiven in the eyes of God. This makes you no better than them (and vice versa).

All Christians are brothers and sisters in Christ, God's children. The worship of a Christian Jew who worships using a Jewish style of worship, a Canadian First Nations church that follows native cultural practices, and a African tribesman who prefers singing for story telling are all equally valid in God's eyes. Do not look down on others for any reason because they live in a different culture than you. And remember that a person does not need to live far away to be in a different culture. In North America, for example, try visiting a Adventist church that is rooted in a different culture than your own (African American, Spanish, Korean, mainly white, even big city vs small town) and experience how we all have the same faith but we express it within our own cultural contexts.

Ephesians 2:14 What should be the result of accepting Christ Jesus into our lives? How do you plan to apply this message to your everyday life?

For he himself is our peace, who has made the two one and has destroyed the barrier, the dividing wall of hostility.
— Ephesians 2:14 (NIV)

The cultural barrier spoken of in this verse is the one that existed at that time between the Jews and the Gentiles. However, the lesson can be applied between peoples of any two cultures, and should not be viewed as having an application only between Jews and Gentiles. Christians should accept and love other Christians as Christ does.

When this honor was written a Pathfinder generally had to look across an ocean to study another culture. They would need to seek out someone who grew up in a different culture to complete the honor. Today, in much of the Western world, the world's cultures have come to us. In North America recent studies show that non-Hispanic whites will soon be less than 50% of the population, and that traditional minorities, collectively, will be the majority. Europe and Australia/New Zealand are also experiencing an increasingly diverse population. What can you do to reach across cultural divides and build friendships that incorporate cultural diversity?

Not only that but Christians should accept and love non-Christians from every culture because this is the only way that people will meet Jesus as their Savior. If everyone had a greater appreciation for cultural differences the world would be a safer, happier, less violent place - more like Heaven will be.

Develop a friendship with a boy, girl or older person from your church, school or community whose cultural background is different from yours and conduct research from the following: library, internet, videos, encyclopedia, etc, about the culture. Arrange an interview with this family and complete the following:

Where did the culture originate?

What language is spoken?

What religions are prominent in that society?

What foods are typically eaten for:

How are eating habits influenced by the food available in that country?

Are there cultural traditions that are different from yours? What are they?

Do people of this culture celebrate the holidays that we celebrate? What customs do they have for celebrating the different holidays?

What customs or traditions from the original culture have been continued by the family in this country?

Is the dress different from dress in your culture?

Identify at least 5 ways in which you are similar and 5 things which make you different and tell how your attitude or feelings towards people of different cultural backgrounds has affected you? How do you feel about your differences?

Earning this honor on your own

This would be an excellent opportunity for you to invite your friend's family to your house for a meal (perhaps Sabbath lunch). Having them come to your house is more socially acceptable than inviting yourself over to their house, though it is going to be more work for you. If you are living with your parents, be sure to clear this with them first. Also make it clear that you wish to interview the entire family about their culture when you make the invitation. Be sure your house is clean before they arrive. If you like, you can even give them a list of the questions you intend to ask ahead of time so that they may prepare. They may also wish to bring a few items from their home to show you.

When they arrive, you should spend a little time socializing with them before the meal is served. Your goal here is to set them at ease and make them feel comfortable. If you like, you may serve appetizers, and perhaps something to drink, such as juice, hot chocolate, or water. After the meal, you should bring out your question sheet. If it's OK with your guests, you may tape record the conversation, or you may simply take notes. Remember to be courteous during the entire visit, and ask follow-up questions for any of their answers that intrigue you, or which you do not understand. Do not pry into personal affairs that are none of your business. Remember, this is not a news magazine interview attempting to sensationalize a scandal.

When the interview is complete, it would be quite acceptable to socialize more. When your guests are ready to leave, be sure to thank them for coming.

Earning this honor as a club

If you wish for you whole club to earn this honor, you have an excellent opportunity to organize a church social. Identify several people from different cultures, and ask them to participate first. These will be the special guests. Give them a list of the questions well before the event so that they may prepare. Once you have at least three specials guests representing three different cultures, set a date, and invite the whole church to attend. Select a different Pathfinder to conduct each interview. Reserve question j for the audience - ask them to answer it.

As part of the social, you may wish to serve a meal consisting of items from the cultures represented. Identify each food item, indicating what it is, what the major ingredients are, and what culture the food represents. Place these food items on a special table. In addition, you may ask your featured guests for recipes ahead of time so that your club can prepare some food as well. Be sure to place the dishes made by your club on a different table so that if it turns out nothing like it's supposed to, nobody blames your guests. You may also open this up as a potluck, asking everyone to bring a cultural dish representing either their own culture or one they are familiar with.

Again, you may record the interviews, or you can have your Pathfinders take notes.

This honor was first introduced as People of Other Lands in 1929 as one of the original honors. It was revised and renamed in 2001.

Discord? What about it!
This page was last edited on 13 July 2022, at 19:16.
This is an official site of the North American Division Youth & Young Adult Ministries of the Seventh-day Adventist Church.
9705 Patuxent Woods Dr
Columbia, MD 21046