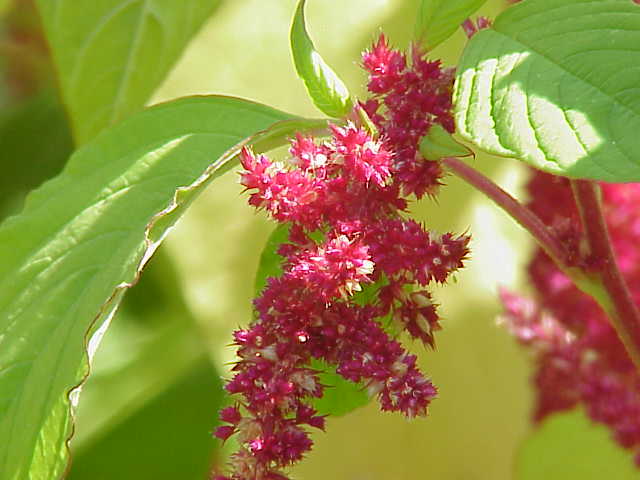 Description: Amaranth, is a cosmopolitan genus of annual or short-lived perennial plants. Catkin-like cymes of densely packed flowers grow in summer or autumn. Approximately 60 species are recognized, with inflorescences and foliage ranging from purple and red to green or gold. Although several species are often considered weeds, people around the world value amaranths as leaf vegetables and cereals.

Where found: Worldwide in temperate and tropical zones

Use: Amaranth species are cultivated and consumed as a leaf vegetable in many parts of the world. The seeds can be collected and used as a grain (or ground into flour). To maximize seed harvest, shake the near-mature seed heads into a paper bag or onto a canvas. If the growing area is large, it is faster to cut the heads all at once when most of the seeds are ripe. The fully ripened heads tend to drop their seeds. Dry for a week and thresh the heads with gloved hands or feet on canvas as the chaff is somewhat prickly. The seeds may be lost when winnowing because the chaff and seeds are of similar size and the seeds are of a light weight. If you heap uncleaned seeds in a bowl and toss them, the light debris will concentrate on the top and can be blown away. Repeat this until only seeds remain.

Discord? What about it!
This page was last edited on 7 October 2021, at 13:58.
This is an official site of the North American Division Youth & Young Adult Ministries of the Seventh-day Adventist Church.
9705 Patuxent Woods Dr
Columbia, MD 21046