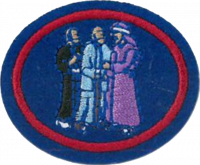 What is meant by the term “patriarch” in a biblical context?

a. Patriarch (father of a tribe), the name given to the head of a family or tribe in Old Testament times. In common usage the title of patriarch is assigned especially to those whose lives are recorded in Scripture previous to the time of Moses, as Adam, Abraham, Isaac and Jacob. "In the early history of the Hebrews we find the ancestor or father of a family retaining authority over his children and his children’s children so long as he lived, whatever new connections they might form when the father died the branch families did not break off and form new communities, but usually united under another common head. The eldest son was generally invested with this dignity. His authority was paternal. He was honored as central point of connection and as the representative of the whole kindred. Thus, each great family had its patriarch or head, and each tribe its prince, selected from the several heads of the families which it embraced." --McClintock and Strong. "After the destruction of Jerusalem, patriarch was the title of the chief religious rulers of the Jews in Asia and in early Christian times it became the designation of the bishops of Rome, Constantinople, Alexandria, Antioch and Jerusalem." American Cyclopedia. Dr William Smith “Entry for Patriarch”. “Smith’s Bible Dictionary”. 1901.

List four major patriarchs whose experiences are recorded in the book of Genesis. Develop a media experience that includes:

An outline of their experience

A character trait they exemplify

Their importance to the rest of the Bible

An instance where God talked directly to them

Who is the father of the twelve patriarchs of Israel? Illustrate using a family tree drawing of their parents, outlining the chronological order of their births.

Jacob. His two wives, Leah and Rachael, and their maids Zilpah and Bilhah are the mothers of the twelve sons who became the fathers of the twelve tribes of Israel. Note that Joseph received a "double portion" in that instead of a tribe of Joseph, there are two tribes of his lineage "Ephraim and Manasseh."

Name three biblical patriarchs not found in the book of Genesis and briefly describe their significant role in the Bible.

Some might say that Job is the third patriarch, but there is wide disagreement among Biblical scholars on this point so the two main patriarchs are mentioned here and fulfill the requirement.

Read a chapter from Patriarchs and Prophets, written by Ellen White, that covers your favorite patriarch. Find five points that you may have learned from your reading. As a group or with a leader discuss the five points.

Patriarchs and Prophets is available in a variety of formats:

OUR RECOMMENDATION - Beginning of the End (PP Adaptation)

OUR RECOMMENDED AUDIO - Beginning of the End (PP Adaptation) Audio

These adaptations are White Estate approved, and are published by Pacific Press. They are used in the Adventist Encounter Curriculum.

Search Genesis 6 and find the evidence that Noah was called by God.

Draw an image of a boat.

Inside the boat, list the reasons Noah’s family chose to go on the boat.

Outside the boat, list the reasons the people chose not to go on the boat.

Circle those things that would influence your decision to be inside or outside the boat.

Compare and contrast Genesis 12 and 22 discussing how Abraham's faith grew.

Give the reason for God changing Abram’s name to Abraham, found in Genesis 17. List why the name was changed, the time frame, and the effect.

List three major events in Joseph’s life where God took a bad situation and used it to further His will.

When Joseph’s brothers came to Egypt, he devised a few tests; what was he trying to ascertain? List the tests and what they were designed to show.

Illustrate the significance of Moses’ life in three major stages. List the length of time, what he learned and what caused the changes.

Leader of his people

What was the primary reason God chose to keep Moses from entering the Promised Land? Discuss whether this was fair and why.

Although Moses did die and his body never found, show biblical proof that he is in Heaven.

Find three examples of how Joshua exhibited his faith in God when others questioned God. Provide biblical text to support your answer.

As the last biblical patriarch, Joshua calls Israel together and speaks to them before his death. Read his speech to Israel in Joshua 24. Through a media experience, show what gods you may have in your life that you need to forsake, so like Joshua you can say: “As for me and my house, we will serve the Lord.”

Discord? What about it!
This page was last edited on 26 May 2021, at 20:10.
This is an official site of the North American Division Youth & Young Adult Ministries of the Seventh-day Adventist Church.
9705 Patuxent Woods Dr
Columbia, MD 21046