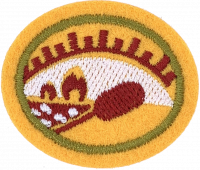 Although the word pizza was first documented in 997 AD in Gaeta and successively in different parts of Central and South Italy, the history of the dish itself is not very clear or well documented.

The precursor of pizza was probably the focaccia, a flat bread known to the Romans as "panis focacius", to which toppings were then added.

Foods similar to pizza have been made since the Neolithic age. Records of people adding other ingredients to bread to make it more flavorful can be found throughout ancient history.

In 16th century Naples a Galette flatbread was referred to as a pizza. Known as the dish for poor people, it was sold in the street and was not considered a kitchen recipe for a long time. This was later replaced by oil, tomatoes (after Europeans came into contact with the Americas) or fish. In 1843, Alexandre Dumas, père described the diversity of pizza toppings. An often recounted story holds that on 11 June 1889, to honor the Queen consort of Italy, Margherita of Savoy, the Neapolitan pizzamaker Raffaele Esposito created the "Pizza Margherita", a pizza garnished with tomatoes, mozzarella, and basil, to represent the national colors of Italy as on the Italian flag.

Pizza is now a type of bread and tomato dish, often served with cheese. However, until the late nineteenth or early twentieth century, the dish was sweet, not savory, and earlier versions which were savory more resembled the flat breads now known as schiacciata. Pellegrino Artusi's classic early twentieth century cookbook, La Scienza in cucina e l'Arte di mangiar bene gives three recipes for pizza, all of which are sweet. However, by 1927, Ada Boni's collection of regional cooking includes a recipe using tomatoes and mozzarella.

The innovation that led to flat bread pizza was the use of tomato as a topping. For some time after the tomato was brought to Europe from the Americas in the 16th century, it was believed by many Europeans to be poisonous (as are some other fruits of the nightshade family). However, by the late 18th century, it was common for the poor of the area around Naples to add tomato to their yeast-based flat bread, and so the pizza began. The dish gained in popularity, and soon pizza became a tourist attraction as visitors to Naples ventured into the poorer areas of the city to try the local specialty.

The basic ingredients for pizza dough are:

In the Old Testament the grain offering had to be in the form of fine flour. In the New Testament Jesus fulfilled that offering as the "bread of life".

When used as a symbol, water is life, salvation, and God's Spirit.

Bible verses on Yeast or Leven

Leaven was prohibited at the Exodus and the Passover which commemorated it. Jesus compared the mistruths of the religious leaders and Herod to leaven in Mark 8:15 "Watch out! Beware of the leaven of the Pharisees and the leaven of Herod." Jesus also pointed out that a little leaven impacts the whole loaf. 1 Corinthians 5:8 "Therefore let us celebrate the feast, not with old leaven, nor with the leaven of malice and wickedness," Therefore leaven represents a small amount of error that will impact everything.

The Promised Land was described as a "land flowing with milk and honey" so honey symbolizes goodness and prosperity. Honey also symbolizes sweet words in several verses.

Oil was an important commodity in Bible times even more than it is today. Practical uses for oil included cooking and lighting lamps. The Good Samaritan (for example) used oil as a healing tool.

A symbolic anointing with oil occurred in several contexts including Jacob's pillar, Aaron as high priest, and in the sanctuary where both the building and sacrifices were required to be sprinkled with oil. Samuel anointed David with oil to show he would become king. James 5:14 talks about anointing the sick with oil, a practice Adventists still occasionally follow. Oil is spoken of as "soft" and has been compared to the Holy Spirit. Oil symbolizes God's blessing and is used to consecrate a person or a thing for God's use.

Salt is mentioned in the Bible in several key ways: a) Salt was part of the covenant with the Children of Israel. Sacrifices were required to be salted. b) Land could be laid waste with salt (naturally or by God). Land that is too salty was not productive. The expression "salt the earth" meaning to to make useless comes from these verses and the Roman idea of applying salt to ensure an area could not be farmed again. c) The "Salt Sea" is what we now call the Dead Sea, a very salty body of water. d) Christians are called to be the salt of the earth and not loose our saltiness. In this context, a few Christians (a little salt) can greatly impact the surrounding population. Salt tastes radically different from the other ingredients but without the salt the whole meal is flat and tasteless

A leavening agent (also leavening agent or leaven agent; /ˈlɛvənɪŋ/ or /ˈlɛvən/), also known as a raising agent, is any one of a number of substances used in doughs and batters that causes a foaming action that lightens and softens the finished product. Formation of carbon dioxide is induced by chemical agents reacting with moisture, heat, acidity, or other triggers.

The leavening agent incorporates gas bubbles into the dough. The alternative or supplement to leavening agents is mechanical leavening by which air is incorporated by mechanical means. Most leavening agents are synthetic chemical compounds, but carbon dioxide can also be produced by biological agents. When a dough or batter is mixed, the starch in the flour mixes with the water in the dough to form a matrix (often supported further by proteins like gluten or other polysaccharides like pentosans or xanthan gum), then gelatinizes and "sets"; the holes left by the gas bubbles remain.

Roman pizza is thin and usually stretched with the help of a rolling-pin. It is baked for a longer time at a lower temperature. Neapolitan pizza instead is thicker and softer. It is formed by hand – that’s why its outer edge is also thicker. It must be cooked for a much shorter time.

1. Neapolitan - Many pizzas are variations on the original pie of Naples — a flat, hearth-baked, chewy crust topped with tomatoes or tomato sauce and mild cheese. A few of the most common variations are New York-style pizza, which is bigger and flatter than the original pizza of Napoli, designed to be cut into large, flexible wedges that can be folded and eaten while walking or working.

2. Sicilian - True Sicilian pizza is a rectangular slab of bread with toppings — which typically do not include cheese — pushed into the dough before baking. The American version is radically different, usually with a thick layer of cheese encasing all the toppings.

Most pizzas are based on these first two types. Here are the most common variants, with New York Style mentioned above under Neapolitan:

3. Chicago Pizza Pie - Around the world, Chicago-style pizza usually refers to the deep-dish, multi-layered pizzas first created by Ike Sewell in the mid-twentieth century. That pie, almost a casserole, offers a unique pizza experience. It usually includes a thin crust in a deep dish, with toppings on the bottom, covered in cheese and tomato sauce on the top. It has also spawned some lesser pizzas, generally called pan pizzas. Pan pizzas are round with a thick, well-oiled crust — somewhat similar to a Sicilian crust — with an indentation to hold more toppings.

4. California-Style Pizza - California-style pizza is characterized by a plate-sized, very thin cracker-like crust and a range of unusual toppings.

Other variations include deep-dish pizza, stuffed crust pizza, pizza pockets, pizza turnovers, rolled pizza, pizza-on-a-stick, all with combinations of sauce and toppings limited only by the inventiveness of the marketing people in the food and restaurant industry.

In order, a Brick oven, wood fired or coal fired, is the best as described in the reference below, followed by a Grill so you are closer to a brick oven type of baking and then followed by a electric oven using a pizza stone to help simulate a brick oven.

3. Electric or Gas oven (Home or Industrial) - Using a pizza stone will help to more evenly distribute the heat to the pizza in a Home oven, so you get closer to a brick oven type of baking.

Discord? What about it!
This page was last edited on 3 January 2023, at 23:37.
This is an official site of the North American Division Youth & Young Adult Ministries of the Seventh-day Adventist Church.
9705 Patuxent Woods Dr
Columbia, MD 21046