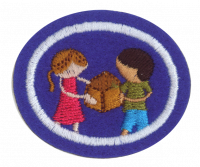 Read the following Bible texts and explain what you think God is asking us to do to help the poor and suffering in our community:

Christ told this parable in response to the question, "Who is my neighbor?" This question came at the end of a dialog with an educated, dedicated believer about God's law in which Christ quoted Leviticus 19:18, "Love your neighbor as yourself." This concept of unselfish love for neighbors is at the heart of God's expectations for humanity and foundational for community service of any kind. In the parable, Christ points out that religious people--the Levite who was a lay leader and the Priest who was clergy--sometimes see needy people but pass by without doing anything that is helpful. While other people--who may not be acceptable to the religious people at all; the Samaritan--respond immediately with the kind of practical, compassionate and unselfish help that is needed. The real neighbor, Jesus says, is the person who shows mercy in concrete ways, and commands His followers, "Go and do likewise." This story is particularly important because Jesus choose to make the exemplary individual, the Good Samaritan, a member of an ethnic group that was despised, looked down upon and discriminated against by the religious community to which Jesus belonged. He is pointing out that following Jesus is about the content of your character, not your race, culture or gender.

This parable is the last in a series of four parables that Jesus told in Matthew 24-25 in response to questions from His disciples about end time events; "When will this happen, and what will be the sign of your coming and of the end of the age?" (Matthew 24:3, NIV) In the previous parables Christ taught that His followers should not begin to attack and blame each other if they become weary in waiting for Him (Matthew 24:45-51); instead they should make sure they have the spiritual resources for long-term discipleship (Matthew 25:1-13) and invest their abilities in the marketplace and lead constructive lives instead of withdrawing from society (Matthew 25:14-30). In this capstone parable of the series, Jesus says that when God sits in judgment at the end of history, His concern will be primarily about how people treated the hungry, the poor, the alien, the homeless, the sick and the prisoner. In other words, the true mark of people who are really looking forward to the return of Christ is that they will be active in working against world hunger, to assure clean supplies of drinking water, to extend hospitality to aliens and refugees, to help the poor, to prevent and care for the victims of disease, and to stand up for the oppressed and imprisoned. It is interesting that when Jesus identifies Himself with the poor, the hurting and the oppressed, both groups in the story have essentially the same response. The righteous say, "When did we see you" among the poor (Matthew 25:38), unaware that their compassionate behavior had any particular religious meaning. In other words, they were not doing good works in order to be saved. And the unrighteous also say, "When did we see you" among the needy (Matthew 25:44), blind to the fact that their self-centered faith which did not see the need to become involved in dealing with hunger, poverty, disease or social injustice was unfaithful to Christ Himself.

Read Chapter 54 (titled “The Good Samaritan”) from The Desire of Ages by Ellen White and write a list of five key points in the chapter.

Explain to your instructor the following:

What is the name of the Adventist organization in your country that serves those in need? What kinds of services does it provide?

Adventist Community Services is usually what the church calls it community service efforts, but you should find out what name is used in your area. Older people in the church still may refer to Adventist Community Services (ACS) as Dorcas, but that name began to be phased out in the 1960s. There are still a few local churches that have a Dorcas Society and it is one of the several ministries under the official NAD Department called Adventist Community Services. Dorcas is named for a woman in the book of Acts who had spent her life serving the poor and was raised from the dead by the apostle Peter. There may also be a group known as Adventist Youth Emergency Service Corp in your area. This program sponsored by ACS and NAD Youth Ministry is for teens and young adults to participate in both ACS Disaster Response and local community services.

Local ACS normally provides clothing (new and used), food, and support to local individuals and families in need. They keep records of those assisted and offer referrals to other organizations when needs are outside of the common skill available at ACS.

What is the name of the Adventist organization that serves those in need outside of the United States, Canada, and Bermuda? What kinds of services does it provide?

Outside the NAD, humanitarian services are provided by ADRA - Adventist Development and Relief Agency.

What do the letters ADRA stand for? Give a brief explanation of each word represented, and explain the difference between “development” and “relief”.

Relief refers to efforts to address short term (though urgent) problems. Development is generally more of a long-term effort. Development projects include building and water projects. Some mistakenly believe that the D stands for Disaster, but while ADRA does respond to disasters, most of ADRA's programing is aimed at long term development projects designed to help populations improve their lives over the long term. .

What items are usually included in a personal hygiene kit?

The point of a personal hygene kit is to allow people to clean up and feel better after a disaster (fire, natural disaster) or when stranded (closed airport for example). Being clean helps people stay calm and civil to each other. Different organizations have different kits based on the specific needs and culture of the area the kits will be distributed and budget, but in general personal hygene kits will include:

What items are usually included in a cleanup bucket?

Assemble a personal hygiene kit or cleanup bucket and donate it to Adventist Community Services, ADRA Canada, or a homeless shelter.

See list above. Why not make a few kits, or get together a group or the whole club and make kits together. As a minimum, each person participating should make a complete kit so 10 people should make at least 10 kits.

Meet with the Adventist Community Services (in the United States and Bermuda) or ADRA Canada (in Canada) leader in your area and ask about projects that your Pathfinder unit or class might be able to accomplish that would help meet needs in your community.

Alternate Requirement: Ask an Adventist Community Service or ADRA Canada leader in your area to make a presentation to your Pathfinder Club or Unit which would include giving suggestions of how youth could help meet needs in your community.

Either way, the point of this requirement is to have a dialog between the people earning the honor and someone who is on the front line of Adventist Community Services or ADRA. Enjoy.

Plan a community service project with your Pathfinder unit or class and complete it.

It is a good idea to complete the Community Assessment or Identifying Community Needs honor first and then use the information you compile as a foundation for planning this project and others.

Complete at least 4 hours of volunteer service, including both time invested in the project mentioned in requirement number eight and time donated to other community services activities.

This time includes planning, preparation, and execution of a project and any time spent working with ACS or other outreach ministry in your church. The typical Pathfinder Club will spend at least these hours in a normal year performing Community Services so this requirement should be easy for active members.

Discord? What about it!
This page was last edited on 27 July 2021, at 23:29.
This is an official site of the North American Division Youth & Young Adult Ministries of the Seventh-day Adventist Church.
9705 Patuxent Woods Dr
Columbia, MD 21046