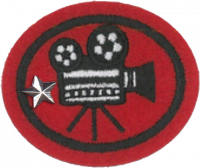 Have the Video honor.

For tips and instruction see Video.

Describe the following media switcher terms and how they are used:

(in or out) OR fade to black: dissolving to or from black (begin & end of show; scene changes)

One camera slowly fades out while another fades in; some overlap; more dramatic effect

Special effect in which a new picture comes in from a corner, top bottom sides, shapes, etc.

(superimpose) when one picture (or graphic) appears on top of or at the same time as another picture. (for example: graphics may be superimposed over a shot.)

Color temperature of the image. Setting depends on the lighting available.

A structure surrounding a vessel’s navigation light so as to shield the light from view at certain points of the compass as required.

The light already present in a scene, before any additional lighting is added.

A device that allows a person to mix several video/audio sources and some special effects to process video renditions.

Used to enhance a video dramatically by the appropriate amount of white and colored light.

In television, the specific form of the signals that make up the video signal. For example, component versus composite format.

A complete video picture composed of two fields (two complete interlaced scans of the monitor screen). A frame consists of 525 interlaced horizontal lines of picture information in NTSC, 625 in PAL.

A routing switcher or auxiliary bus used to expand the number of video or key inputs that can feed an input of a digital picture manipulator or keyer. Many keyers only accept one key source and fill, but by connecting an input selector to those inputs, many more source and fill signals become available just by selecting cross points on the input selector.

In video, a device that directly displays a video picture from a camera, videotape recorder, special-effects generator, or video switcher output. This is typically multiple screens, one for each of the inputs and one for the final monitoring display.

Livestreaming refers to online streaming media simultaneously recorded and broadcast in real-time. It is often referred to simply as streaming.

List some of the advantages and disadvantages of two different video file formats.

Describe the effects of lighting on a media production. How can lighting be adjusted to achieve the desired effects?

All video uses some sort of lighting, whether it be natural light (from the sun) or artificial lights. The goal of video lighting is to choose the best source(s) to achieve your goals.

First and foremost you need enough light. You must ensure that your camera is able to record an acceptable picture in the conditions. With modern cameras this is seldom a problem except in very low light or strong contrast.

Assuming you have enough light, you must then consider the quality of the light and how the various light sources combine to produce the image.

When moving between locations, think about what light source you are using. If you move from an outside setting to an inside one with artificial lights, the amount of light may seem the same but the color temperature will change according to the type of lights. In this case you need to white balance your camera for the new light source.

Bring media into the NLE

The area in the NLE where the media is displayed in chronological order.

Dividing the media into sections for editing in Sony Vegas

Deleting portions of the media that have been split

The ability to undo an editing task

A change from one shot to the next, examples: cut or crossfade

Adding a video track on top of another in the timeline

Adding words to the timeline

A type of scrolling title used for ending credits

The process of calculating effects in a video editing program to produce final video output.

The amount of detail in an image or signal. On a computer screen, the resolution is the number of pixels.

The lower third of the screen where a graphic overlay can be placed. This can include text.

Based on the number of media inputs available to you, complete two of the following projects:

Demonstrate how to operate a media switcher with a minimum of three input sources, two of which have to be cameras.

Create a 5-7 minutes media clip featuring multiple effects. Demonstrate panning, zooming and selection of sources. Include a title and a credit roll. Show it in a public place, like church, social media or portable device.

Demonstrate how to import or upload a created video onto an online video source, social media, etc. Ask your media director or webmaster for assistance.

Note: church websites would also be a great place to upload the videos.

Parent supervision/authorization may be needed if uploading to a public site where account creation is required.

Demonstrate how to add a graphic and/or text in the lower third of a live stream.

Read Daniel 12:4 and Mark 16:15 and discuss how video can be used to increase knowledge and preach the gospel to all creation.

“But you, Daniel, shut up the words, and seal the book until the time of the end; many shall run to and fro, and knowledge shall increase.”
— Daniel 12:4 (NKJV)

When Daniel penned his text, he indicated that there would be an increase in knowledge. In order to witness “live” what was happening, one had to be “present.” Today, we can witness “live” events through multiple media.

We are now able to fulfill what Jesus said in Mark 16:15 by using media technology to reach places that Christians are forbidden to enter vía the Internet and satellite.

Discord? What about it!
This page was last edited on 16 February 2022, at 02:34.
This is an official site of the North American Division Youth & Young Adult Ministries of the Seventh-day Adventist Church.
9705 Patuxent Woods Dr
Columbia, MD 21046