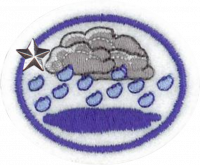 Have the Water Science honor.

Illustrate and briefly describe how does each physical state of water contribute to the earth’s climate.

Solid (ice)
reflects the sun’s heat, thus keeping the earth cool by limiting the amount of light that is turned into heat. Ice also helps to control the temperature of the earth by being a sink for heat.
Liquid (water)
has a natural ability to absorb carbon dioxide from the atmosphere. This process allows the temperature of the earth to come down. As the sun shines on water, the absorbed light increases the temperature of the water. This process of heating and cooling allows for water to maintain a stable temperature.
Gas (vapor)
plays a critical role in maintain earth’s weather. The process of water evaporation allows for the formation of clouds. As the clouds become heavy, they produce rain, which cleans the air and waters vegetation.

Discuss with a group the effects of water by flooding and erosion.

Flooding can cause extensive damage to land and property. It is also blamed for lose of life, serious injury, and damage to sewer systems and roads. Damage caused by a flood also have serious cost of repair associated with it.

Erosion can occur by means of water, causing soil and rock to be removed which can cause considerable damage.

Explain the following terms with reference to changes in water state. 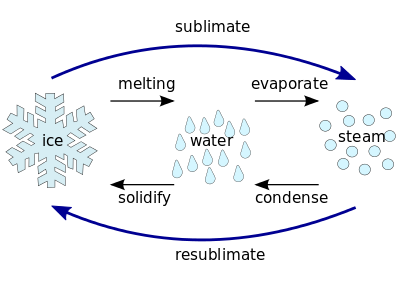 From gas (water vapor) to liquid.

From liquid to gas (water vapor).

From liquid to solid (ice).

From solid to liquid.

From gas directly to solid without becoming liquid.

From solid directly to gas without becoming liquid.

Be able to explain and illustrate making use of photographs, diagrams or sketches the following types of water:

Filtered water is water that has gone through a process of being cleaned by having it flow through fine strainer.

Soft water is water that has gone through a process of having calcium, magnesium, along with other chemicals removed that reside in hard water.

Distilled water is water that has first been boiled into steam in order to remove the impurities. Through condensation, the steam turned back into pure water into a clean container.

Rain water is water vapor that became heavy enough to descend under the force gravity.

Snow water is rain water that comes through the atmosphere at freezing temperatures below 32 °F or 0.0 °C.

De-ionized Water is water that has gone through a purification process where salts have been removed; such as sodium, calcium, chloride, and bromide.

Raw Water is considered water that has not gone through any type of purification process. This type of water is found in lakes, rivers, and rain water containing millions of germs and viruses.

Hard Water is water that is saturated with minerals such as calcium, iron, magnesium, and many other inorganic minerals. Water in lakes, rivers, and well water is considered hard water.

What is a watershed? Discuss with a group the importance of watersheds.

A watershed is a considerably large area of land where rainfall or melted snow is gathered at a lower elevation point.

A group discussion with Pathfinders and staff should be conducted to understand the importance of watersheds. Selected topics of interest could include their protection and the role they play with regard to our water supply.

Note that ground pollution is generally picked up by water as it flows downhill, so any pollution within the watershed will be concentrated at the lower elevation. Since watersheds cover such vast areas, they can pick up an enormous amount of pollutants and concentrate them in a much smaller area.

How does filtering water make it clean?

The process of filtering water removes impurities such as sediments, bacteria, protozoa, and microbial cysts (that can cause disease) from water by means of a fine physical barrier. Chemical and biological processes are also used to filter water. A filter is designed to cleanse water to certain levels, depending on what purpose the water will serve. Irrigation, drinking water, aquariums, and swimming pools are common applications of water filtering.

On your own or with a group, perform the following experiment and explain in your results what can be done to keep clean water sources.

There are many ways that water can become polluted. Aside from natural pollution such as soil, leaves and living organisms, people cause the most serious pollution. From agricultural fertilizers and pesticides to urban runoff and industrial waste, pollutants can seep into groundwater that is often used as a source for drinking water. Follow the instructions in this experiment to make polluted water and observe what pollutants may do to water supplies.

If these substances were added to a real water source, how might they affect the water?

Can you think of instances where materials such as these (oil, chemical detergent, etc.) might have been spilled or dumped and possibly endangered a water supply?

What measures might a community take to prevent such accidents?

Develop a spiritual application from water and share it with your group.

There are many angles to use in developing a spiritual application. Here are some ideas to get you going:

Discord? What about it!
This page was last edited on 14 September 2021, at 19:06.
This is an official site of the North American Division Youth & Young Adult Ministries of the Seventh-day Adventist Church.
9705 Patuxent Woods Dr
Columbia, MD 21046