From Pathfinder Wiki
< Investiture Achievement‎ | Explorer
Jump to:navigation, search
This page contains changes which are not marked for translation.
Other languages:
English • ‎español

Also consider reading chapter 7 and chapter 8 from Patriarchs and Prophets.

There are many fine books written from a creationist perspective. Some examples (links to books on Amazon):

Most museums of natural history will have a fossil collection, and even small museums are likely to have a few. If you do not know of such a museum in your area, the Internet is your friend. Try searching for "fossil," "museum," and the name of your locality. If you are still unsure, get a list of local museums and call them. They will be happy to tell you if they have fossils on display, and if they do not, they may be able to direct you to a museum that does.

Fossils were caused by the flood, which was a result of sin.

Then the Lord saw that the wickedness of man was great in the earth, and that every intent of the thoughts of his heart was only evil continually. 6 And the Lord was sorry that He had made man on the earth, and He was grieved in His heart. 7 So the Lord said, “I will destroy man whom I have created from the face of the earth, both man and beast, creeping thing and birds of the air, for I am sorry that I have made them."
— Genesis 6:5-7

The North Star, the Big Dipper, and the Little Dipper 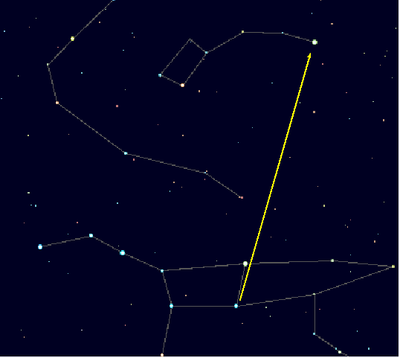 The North Star, more properly known as Polaris, is a star directly to the north at an elevation equal to your latitude. In other words, if your latitude is 38°, it will be 38° above the horizon, and directly north.

More often though, we use Polaris to find north rather than using north to find Polaris. Do this by extending the line through the two stars at the end of the Big Dipper's bowl by about five times. The Big Dipper is part of the constellation Ursa Major. It is composed of seven bright stars in the north, and is one of the few star groupings that actually look something like what it is named for: a big dipper.

The Little Dipper, part of the constellation Ursa Minor is more difficult to see because the stars that make it are not as bright as those that make the Big Dipper. The best way to find it is by first finding Polaris, the North Star. That star forms the end of the Little Dipper's handle.

These stars are visible year-round in the Northern Hemisphere, though depending on the time of night and season of the year, they may have a different orientation as they all rotate around the North Star.

The Shaking of the Powers of Heaven

'December 16, 1848, the Lord gave me a view of the shaking of the powers of the heavens. I saw that when the Lord said "heaven," in giving the signs recorded by Matthew, Mark, and Luke, He meant heaven, and when He said "earth" He meant earth. The powers of heaven are the sun, moon, and stars. They rule in the heavens. The powers of earth are those that rule on the earth. The powers of heaven will be shaken at the voice of God. Then the sun, moon, and stars will be moved out of their places. They will not pass away, but be shaken by the voice of God.

'Immediately after the tribulation of those days shall the sun be darkened, and the moon shall not give her light, and the stars shall fall from heaven, and the powers of the heavens shall be shaken.' Matthew 24:29

Critics of Ellen White have sometimes seized on this Early Writings passage saying Ellen White fabricated the idea of a open space in Orion. The website Adventist Defence League has addressed these critics.

"NASA’s power Hubble Telescope recently helped researchers discover some more information about Orion Nebula. In a video titled, “Hubble Snaps the Clearest View of the Orion Nebula” they claim to notice what they call “a ball-like cavity” within this constellation. Notice what else they say about the center of Orion Nebula:

“Packed into the center of this region are bright lights of the Trapezium stars, the four heftiest stars in the Orion Nebula. Ultraviolet light unleashed by these stars is carving a cavity in the nebula and disrupting the growth of hundreds of smaller stars. The dark speck near the bottom, right of the image is a silhouette of an edge-on disk encircling a young star. Another whitish-looking disk is visible near the bottom, left, just above the two bright stars. This disk is encased in a bubble of gas and dust."

You must complete the requirements listed above this one on the current page.

The Ferns option is exactly the same as the practical requirement in the Ferns honor Honor. Completing the Ferns Honor also meets Requirement 5 below.

Guidance for completing these requirements can be found in the Weather, Weather - Advanced and Ferns honor pages.

Lists of honors sorted by Category and Skill Level can be found in the AY Honors.

While there are a large number of Nature honors at Skill Level 2 or 3 to choose from, logical choices might be:

Here is a complete list of Nature honors at skill levels 2 and 3:

Discord? What about it!
This page was last edited on 15 May 2021, at 22:55.
This is an official site of the North American Division Youth & Young Adult Ministries of the Seventh-day Adventist Church.
9705 Patuxent Woods Dr
Columbia, MD 21046