From Pathfinder Wiki
< Investiture Achievement‎ | Voyager
Jump to:navigation, search
This page contains changes which are not marked for translation.
Other languages:
English • ‎español

Suggested books and sources of books and articles:

Option 1 and 2: Nicodemus was a Pharisee and a member of the Sanhedrin, who, according to the Gospel of John, showed favor to Jesus. He appears three times: the first is when he visits Jesus one night to listen to his teachings (John 3:1–21); the second is when he states the law concerning the arrest of Jesus during the Feast of Tabernacles (John 7:45–51); and the last follows the Crucifixion, when he assists Joseph of Arimathea in preparing the corpse of Jesus for burial (John 19:39–42). The John 3 verses are what this requirement is referencing. 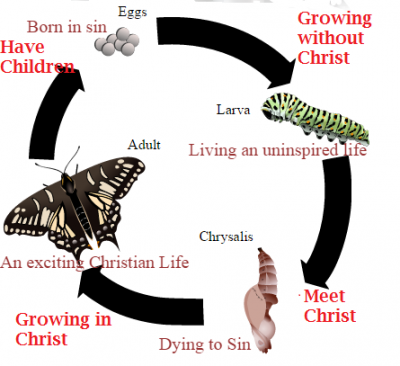 This Wikipedia article goes into great detail on the life cycle of the butterfly. The short version is that:

a) butterflies start as eggs which are tiny, round, oval, or cylindrical object, usually with fine ribs and other microscopic structures.

b) butterfly larvae, or caterpillars, consume plant leaves and spend practically all of their time in search of food. Caterpillars mature through a series of stages called instars. Near the end of each instar, the larva undergoes a process called apolysis, in which the cuticle, a tough outer layer made of a mixture of chitin and specialized proteins, is released from the softer epidermis beneath, and the epidermis begins to form a new cuticle beneath.

c) The larva transforms into a pupa (or chrysalis) by anchoring itself to a substrate and moulting for the last time. After it emerges from its pupal stage, a butterfly cannot fly until the wings are unfolded. A newly emerged butterfly needs to spend some time inflating its wings with blood and letting them dry, during which time it is extremely vulnerable to predators. Some butterflies' wings may take up to three hours to dry while others take about one hour. Most butterflies and moths will excrete excess dye after hatching. This fluid may be white, red, orange, or in rare cases, blue.

The life cycle than repeats.

Discussion: Most species are born, breed and die. The butterfly, however, goes through a form of rebirth where it goes into a pupa before reemerging as a beautiful butterfly. Christians likewise go from uninteresting caterpillars through a transformation where they die to their old nature and emerge into a more beautiful creation of God.

Option 3: YouTube is a good source for videos on Intelligent Design, but choose wisely.

Ben Stein's "Expelled: No Intelligence Allowed" on YouTube or Amazon is a movie about the freedom of speech suppression to which Intelligent Design proponents are being subjected to by many atheists in academia. Stein is a Jew who believes in Intelligent Design much the same way that Adventists do. This documentary is quite entertaining.

DNA By Design (2010) by Stephen C. Meyer one of the outstanding ID scientists.

Discussion: If you reject Intelligent Design and believe that chance is responsible for the Universe, how can you have relationship with the God who claims to have created everything? Is God to be called a liar and then expected to save us from our sins?

Option 1: This Wikipedia article on Hydroponics is a good place to start. Much of the information online about hydroponics is focused on cannabis cultivation, but the use of hydroponics is a perfectly acceptable method of raising many types of plants.

Option 2: Requirement 7 of the Moths and Butterflies Honor states:

Identify in the field, then draw, photograph or collect 25 species of moths and butterflies, with not more than two specimens of any one variety. When collecting, specimens should be anesthetized by using carbon tetrachloride or other chemical in collecting jar. In either project correctly label and include the following information:

e. Plant on which the insect was feeding or the material on which it was perched

Fulfilling this requirement is a good start on the Moths & Butterflies For identification purposes, you will need to get a copy of a good field guide. Make sure you select one that covers the area in which you live. As with many other identification tasks, it is best to find a specimen first and then attempt to identify it, rather than going out to look for a particular specimen.

Pathfinders are encouraged to draw or photograph specimens rather than collect them. Identification should be done in the field. If going as a group, it is OK to bring one camera (perhaps the instructor's) and then have the rest of the participants make their drawing from the pictures taken. If you have access to a digital camera and a projector, you could project a slide show and have the Pathfinders make drawings as the slides are shown. You may also print the photos and pass them around.

You must complete the requirements listed above this one on the current page.

Option 1: This might be a good opportunity to tackle the Edible Wild Plants where detailed guidance can be found to meet this requirement.

Option 2: This requirement matches Requirement 4 of the Environmental Conservation where detailed instructions and tips can be found.

Popular choices, because the major requirements are covered here, include:

Here is a complete list of Nature honors at skill levels 2 and 3:

Discord? What about it!
This page was last edited on 22 February 2021, at 02:22.
This is an official site of the North American Division Youth & Young Adult Ministries of the Seventh-day Adventist Church.
9705 Patuxent Woods Dr
Columbia, MD 21046