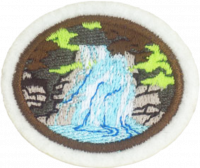 Define the following types of waterfalls and give one example of each.

In a block waterfall, water descends from a relatively wide stream or river.

In a cascade waterfall, water descends a series of rock steps.

In a horsetail waterfall, descending water maintains some contact with bedrock.

In a plunge waterfall, water descends vertically, losing contact with the bedrock surface.

In a segmented waterfall, distinctly separate flows of water form as it descends.

In a tiered waterfall, water drops in a series of distinct steps or falls.

Choose 10 waterfalls, including 2 from near the area or state in which you live, and list the following information about them: Name, Total Height, Waterfall Type, Watercourse, Location.

The two from your area will depend on your area. Here is an example to start your research with:

Complete two of the following activities.

Visit a waterfall and write a paragraph telling about your experience.

Field trips are always fun. Maybe this visit could count toward the Hiking Honor. That honor requires keeping a record of your hikes so this fits very well. Happy waterfall viewing.

Choose a waterfall (other than ones in #2) of interest to you and record facts and interesting information about the falls that you have selected.

This information should be similar to the example under #2. Don't forget that the eco-system around the waterfall can be just as interesting as the basic statistics of the waterfall itself.

Watch a video about a waterfall.

The intent is a meaningful video - not just a 2 minute tourist video.

Make a scrapbook about waterfalls. Include pictures of waterfalls and important information about each one. This may be a group project.

This could be a paper scrapbook (a good project for the Scrapbooking Honor or perhaps an online "scrapbook" on a webpage. The info gathered for requirement #2 is a good place to start. Have fun.

Water is mentioned in each of the following verses. Describe what is happening in each verse, then tell what the water symbolizes.

He answered and said, “A Man called Jesus made clay and anointed my eyes and said to me, ‘Go to the pool of Siloam and wash.’ So I went and washed, and I received sight.”
— John 9:11 (NKJV)

In this verse, a man who was born blind was explaining to the Pharisees how he had been healed of his blindness by Jesus. Rather than recognizing the divinity of Jesus, the Pharisees ignore the fact that Jesus had healed the man's blindness, but rather seized on the detail that Jesus had "made clay" which was "in violation of the Sabbath." They were indeed "straining out a gnat and swallowing a camel." (Matt 23:24).

After that, He poured water into a basin and began to wash the disciples’ feet, and to wipe them with the towel with which He was girded.
— John 13:5 (NKJV)

This verse takes place during the Last Supper. The disciples had been arguing among themselves about who of them was the greatest, so none of them wanted to stoop down to serve the others by washing their feet. That was a job for the lowliest servant in a household, not for someone who aspired to the Secretary of the State in the New Kingdom. All of them knew that someone needed to perform this task, but none would. The disciples were greatly embarrassed when they realized that Jesus himself was doing this.

The water here represents cleansing from sin. Just as He was the only one willing to take the role of a servant, Jesus Jesus was also the only One able to rid them of their sin.

When He had been baptized, Jesus came up immediately from the water; and behold, the heavens were opened to Him, and He saw the Spirit of God descending like a dove and alighting upon Him.
— Matthew 3:16 (NKJV)

This verse describes the baptism of Jesus. Baptism represents our own death, burial, and resurrection. We die to ourselves, are "buried" in the water (representing the grave), and then resurrected as new, born again Christians. The water is also cleansing us of our old life of sin.

Discord? What about it!
This page was last edited on 13 July 2022, at 20:33.
This is an official site of the North American Division Youth & Young Adult Ministries of the Seventh-day Adventist Church.
9705 Patuxent Woods Dr
Columbia, MD 21046