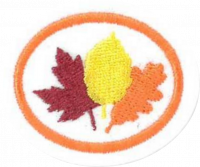 Describe or explain the following information about temperate deciduous forests:

While most of the Youtube videos speak of evolutionary origins for the temperate deciduous forest biome, this video only deals with describing the present identifying marks of a deciduous forest. [1]

Untamedscience.com contains several videos and detailed information about Temperate Deciduous Forests as well as other biomes! [2]

A moist forest composed of broad-leafed trees, which lose their leaves in the winter.

The climate has distinct warm and cool seasons - one of them may be rather dry. The four seasons - spring, summer, atutumn, and winter are distinct periods of the year with differing temperatures and weather (climate).

There are three layers - canopy, understory, and rich layer of humus on the forest floor. The canopy is the covering made by the tall broadleaf trees. The understory is shrubs, bushes, briars, and the like. The quantity of leaf matter, combined with the high moisture that is part of this biome create a quickly decomposing and thus nutrient rich layer of humus (dirt) on the forest floor. The forest floor has a huge variety of shade tolerant plants and wild flowers that can bloom and turn to seed efficiently in a shady moist environment.[3]

There is a seasonal appearance and disappearance of the canopy. The canopy is the leaves on the trees. These leaves die each autumn and in the spring, appear as new growth.

Temperate deciduous forests are all in the temperate latitudes, 23 degrees to 66 degrees (both North and South of the equator).

Flowering species time their flowering for the spring just prior to the canopy's appearance, when light still makes it to the forest floor.

Migratory birds often time their arrival for shortly after the canopy opens so as the have access to the (now present) insects and the protective cover of the canopy. [4]

Deer, squirrels, foxes, coyotes, and bear are the dominant mammals in the temperate deciduous forest.

Provide other names that are used for the temperate deciduous forest.

From a map, show the continents where temperate deciduous forests can be found. 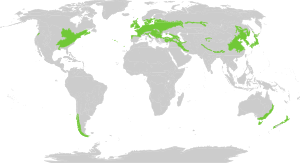 North America, Europe, Asia, Australia. Note forests are not found in all parts of these continents, but they occur in locations that have suitable climates in these 4 continents.

Define biome. What is usually found north of the temperate deciduous forest?

One way of mapping terrestrial biomes around the world

A Biome is a group of plants and animals that are adapted to meet the natural regional environment’s physical environment, latitude, elevation, and terrain. Taiga (coniferous forest) – the winters are too cold here for deciduous trees to grow.

Please view the linked "biomes of the world" image to see how some scientists divide the worlds biomes.

Identify, from pictures or in nature, four types of trees commonly found in temperate deciduous forests.

You can choose other species common in your area. Maple, Beech, Elm, Oak, Tulip Poplar, and Sassafras are common in Northern Hemisphere temperate deciduous forests, while in the Southern Hemisphere trees of the genus Nothofagus dominate.

Explain why leaves turn color in the fall.

Read Genesis 1:11-13. Discover when Genesis 1 says the trees were created.

Identify, from pictures or in nature, at least five species of flowering plants commonly found in a temperate deciduous forest. Why are they usually only found in spring?

A much more extensive list along with images is available at wildflower.org

Flowering species time their flowering for the spring just prior to the canopy's appearance, when light still makes it to the forest floor. Others that tolerate partial or full shade bloom later.

Identify, from pictures or in nature, at least five species of mammals commonly found in the temperate deciduous forests.

Black bear, deer, raccoon, skunk, squirrels, chipmunk, opossum, and fox are some of the most widespread of mammals present in a temperate deciduous forest are common and widespread. Less common are coyote, wolf Duckbill platypus (Australia) and weasel.

Identify, from pictures or in nature, at least five types of birds commonly found in temperate deciduous forests.

Please modify this list for those common in your closest temperate deciduous forest. Note: the following gallery heavily favors birds in the North American biome. If you find Creative Commons images for birds found in the biome on other continents, please add them to the gallery AND list above.

PLEASE NOTE THE WORDING "to your region." Hardwoods provided by broadleaf trees from the temperate deciduous forest biome provide different resources (albeit related) to different portions of the world. The list below is a suggestion and may differ somewhat from the correct answer for your region.

Learn about one invasive species that affects temperate deciduous forests.

National Park Service (USA) has a complete site with hundreds of links dedicated to invasive species present in the National Park system [7].

In the United States, the story usually goes something like this: Originally brought from (China, Japan, India, etc.) as an ornamental or decorative plant. Escaped, and began to take over the area.

Other plants were brought over purposefully to aid in erosion control, plant control, or even insect control. However, the invasion of the new species usually far outweighed the benefits.

Some invasive plant species include:

Prepare an object lesson about a plant, animal, or bird which lives in temperate deciduous forests. Share this lesson in a group setting such as a club/unit worship, children’s story in church, campfire, or vespers.

Challenge the young people to collect (if collection is allowed) items as they go on a hike or walk through a deciduous forest. They can share their stories upon their return.

An OBJECT LESSON is defined as a type of story which involves a visible tangible object that the speaker displays during her/his talk.

Here is one example of many:

Fall Colors: The fall colors of the deciduous forests are famous around the world! The green chlorophyll in the leaves, which uses the suns light to make energy for the leaf, will become toxic to the tree if it remains and the temperatures get to cold. So the leaves break down the green-colored chlorophyll leaving the yellow and orange-colored carotene pigments, which have been hidden all summer by all the green chlorophyll. The red pigment of maple leaves is caused by anthocyanin. This red pigment is added in the fall at about the time the green chlorophyll disappears. While the colors are beautiful, one can’t help but wonder why so much energy is used to make all that red pigment which will last for only a couple of weeks and then be of no use when the leaves fall off?

Scientists have now discovered at least three possible purposes for the anthocyanin in fall. Red repels aphids! Seeing their favorite tree turn red makes them jump off and find some other leaf to eat! So once a year the anthocyanin acts as an insect repellent. Secondly, when the leaves fall off, the anthocyanin is absorbed in the soil around the base of the tree and acts as an herbicide. Other trees are less likely to sprout and grow and compete with the mature tree! The third reason for anthocyanin is that it can help the tree trap the sun’s energy when the chlorophyll is gone thus extending the growing season a bit longer.

God often does things that may seem strange to us but He always has a purpose for what He does. He acts on our behalf; each act for a functional purpose. But He also adds beauty to the work He does. Enjoy the fall colors and be reminded that He is in control.

Do at least three of the following activities:

Visit an exhibit or conservatory of deciduous tree species.

Many hiking trails offer trail maps or sign posts with tree names and details mounted on or near the tree. Research whether your area has such a trail. Another option is to have a naturalist guide you on a hike to identify deciduous tree species.

Make a collection of at least five types of leaves from temperate deciduous forest trees.

Visit a zoo or nature center where there are animals typical of the temperate deciduous forests biome.

Draw or paint a picture of something you had fun learning about while studying temperate deciduous forests.

As a group, make a short video about a real life temperate deciduous forest conservation project. Explain why this specific habitat should be saved.

Visit a lumber store and learn to identify by their grain texture at least three species of trees that are deciduous.

Discord? What about it!
This page was last edited on 13 August 2021, at 14:00.
This is an official site of the North American Division Youth & Young Adult Ministries of the Seventh-day Adventist Church.
9705 Patuxent Woods Dr
Columbia, MD 21046